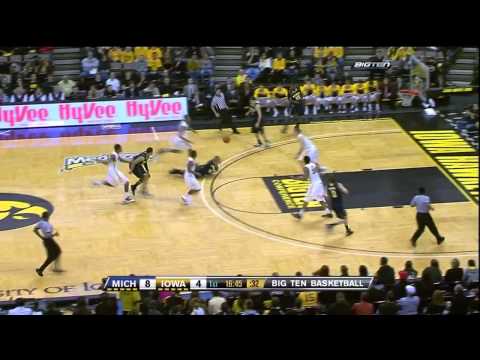 A common theme for Tim Hardaway Jr.’s big games (excluding the Penn State game) is that he is usually able to get a few early shots to fall. These were more important earlier in the season because it seemed like he would get in a funk if he missed some early open looks and he wouldn’t be effective. At this point, Tim seems to have matured so rapidly — and he doesn’t need to rely on the 3-point shot as much — that he can disregard early misses and force himself to be a factor whether he’s hitting his outside shot or not. Still, it’s always good for Tim to get things going from beyond the arc early in the game, especially in one as sloppy as this one was. On the first play, the “Big Three” team up to get Tim open and get him the ball: Jordan Morgan sets a screen on Tim’s man and Darius Morris finds him for the open triple. On the second play, Darius gets one of his more impressive assists on the season, tipping the ball to Hardaway in the corner while falling down in transition. Tim buries the shot but this is an extremely impressive play by Morris, who manages to not just see Hardaway but also get him the ball all in the split second that he’s falling to the ground.

2) Zack Novak fouling out on all charge attempts

In many ways, this video is a microcosm of Zack Novak’s night in Iowa City. The junior couldn’t get anything going and it was just one of those nights. Not only did Zack go 0-10 from the field, he also fouled out with each foul being called on Novak as he attempted to take a charge. Michigan’s bigs (and, to a certain extent, the guards) try to draw offensive fouls in the paint instead of going up to block shots because of a general lack of explosiveness in the Wolverine frontcourt. Zack and Jordan (and Jon Horford and Evan Smotrycz, at times) have all gotten pretty good at getting in position and drawing charges. But when the refs aren’t blowing the whistle in your favor, you’re really out of luck, and that’s where Zack found himself last night. Many of these could have gone either way but Novak’s problems just seemed to compound as seemingly every 50-50 call went the wrong way.

Early in the second half, Iowa took a commanding 10-point lead on a 3-pointer by Matt Gatens. Then Tim Hardaway decided to put his foot down. The freshman nailed two triples and a mid-range jumper in the span of about four minutes. That, combined with some solid defense from Michigan, cut the Iowa lead to just two at the 14-minute mark in the second half. Michigan gets a lot of open looks for its shooters by running them through screens, and that’s exactly how Hardaway gets his first two 3-pointers. On the first, Morgan sets a ball screen and both Iowa defenders back off of Hardaway. Hardaway reads this correctly and knocks down the wide open jumper. On the second, Hardaway gets his shot off while Blake McLimans sets an effective, albeit moving, screen. The mid-range jumper is just an extremely impressive move by Tim and shows off how far the freshman has come this year in terms of creating his own shot. John Beilein talked since day one about Hardaway taking over that Manny Harris role, and early returns appear to be proving him right.

These sure were fun to watch, weren’t they? The first play was just brilliant on both ends, as Darius makes an incredible pass to Jordan, who proceeds with one of his strongest finishes this year. It’s amazing to see what he can do considering where he was at a year ago. This play is what Darius does best: drive the lane, draw and extra man, find his unguarded teammate in a position to finish the play. Here, Darius draws Jordan’s man and bounces a pass right through two defenders to Jordan, who catches it and slams it home with one hand directly over Andrew Brommer. The best part might be watching Hardaway’s reactions, he starts galloping around and clearly wants in on the action. Three minutes later he has his chance on the fast break as Darius finds Tim with a beautiful no-look pass in transition and Tim finishes with style over the same unfortunate soul, Andrew Brommer. His teammate Zach McCabe made the smart move and just stayed out of Tim’s way. A couple of highlight-reel plays for Michigan I wouldn’t be surprised to see integrated into the pre-game video at Crisler.

It doesn’t get more pressure-packed than this. Down two points on the road in a hostile arena with two free throws to tie the game. Jordan Morgan, a 53 percent free throw shooter on the season, stepped up to the charity stripe and calmly sunk them both. He even managed to remain focused despite an Iowa timeout between the pair. This was a really great moment for Morgan and very gratifying as fans to watch knowing all he’s gone through and how hard he’s worked to have the kind of year he’s having. The free throws forced overtime and allowed Michigan to gut out an ugly, tough road win that they couldn’t afford to lose. These shots, as Dylan mentioned in the recap, were without a doubt the play of the game.