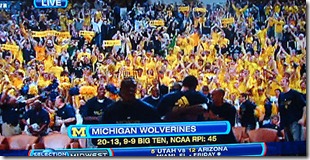 It’s time to finally acknowledge that Michigan is “on the bubble”, even if the Wolverines are still on the outside looking in. I was trying to resist the temptation to start posting things like this but, at this point it’s relevant information.

More notes after the jump.

Michigan’s resume has strengths, most notably a handful of solid road wins – at Michigan State, Clemson and Penn State – but it also has a number of flaws. Two wins against RPI top 50 foes, both in the 40s, is just not good enough when push comes to shove on Selection Sunday. Luckily, Michigan’s last three opponents – Wisconsin (18), Minnesota (39) and Michigan State (43) – all rank in the RPI top 50 and present ample opportunity for Michigan.

Two years ago, Michigan was one of the last teams selected in the field despite seven RPI top 50 wins including signature non-conference victories over UCLA and Duke. That team played its way into the tournament, knocking off Purdue at home before winning at Minnesota to close the regular season. A similar performance down the stretch appears to be necessary for Michigan to the have a shot at dancing.

It’s important to remember that you are never dealing with absolutes when it comes to the bubble. The first obvious factor is that a group of individuals, not any specific ranking or polling system, select the field. This is probably a positive, but it is important to remember that they can pick whatever team for whatever reason. The most important thing to remember is that games aren’t played in a vacuum. The bubble picture today is nothing like the bubble picture tomorrow. Great teams are upset, middling teams fall apart, and random mid-majors steal at larges with surprising conference tournament runs. The key for Michigan is to continue to improve its resume over the next three weeks, regardless of what anyone else does.

That said, there are a couple things that Michigan needs to do to remain in the conversation. A sub .500 conference record would all but eliminate Michigan, barring a miraculous Big Ten Tournament run. The question is whether a .500 conference record would be enough. Without a win over Wisconsin it might not be, as Michigan would have a season full of good wins without a headlining signature win. The Big Ten Tournament will unveil an entirely new set of scenarios but, for now, the number one priority is beating Wisconsin. Wednesday’s game, more than the rest, has the chance to instantly improve Michigan’s tournament resume.

Crashing the Dance: First Four Out

The Wolverines have swept Penn State, but lack the kind of quality wins the Nittany Lions feature. They do have the schedule to get to 10-8, though, with Wisconsin and Michigan State at home around a trip to reeling Minnesota. If the Wolverines can sweep those three, they’ll also have struck further blows to the Spartans and Gophers. First things first: Beat the Badgers on Wednesday.

If you’re looking for a team that could find its way into contention as a possible at-large berth, then check out Michigan. The Wolverines have top-50 wins over Harvard (yes, the Crimson are No. 43), at Michigan State and won road games at Clemson, Penn State and Iowa (Michigan State couldn’t beat either of the final two on the road). The Wolverines have one bad loss, by 17 at Indiana. But they have a favorable schedule down the stretch after beating Iowa on the road Saturday. Michigan hosts Wisconsin, goes to struggling Minnesota and finishes at home with a chance to sweep Michigan State. At the very least, Michigan could go into the Big Ten tournament needing one more quality win to secure a possible bid if it wins its two remaining home games.