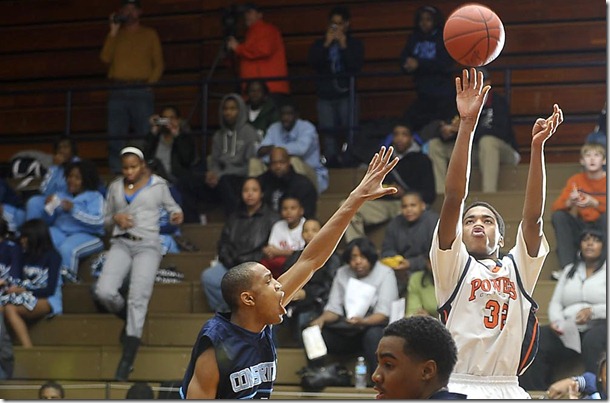 Burke had 14 points on 5 of 7 (1-2 3pt) shooting, seven assists, four steals, and four rebounds in the Columbus City League Championship game. Burke had 10 points in the first quarter before Waltnut Ridge started throwing a variety of box-and-one and triangle-and-two defenses to try to slow down the talented floor general. It was Northland’s fifth consecutive City League Title and we posted video here.

Northland tips off the State Tournament this Wednesday as they face Groveport Madison. Burke finished the regular season averaging 24 points, seven assists, three rebounds and two steals per game while shooting 66% (143-232) on twos and 48% (39-81) on threes

Brundidge had 17 points and 14 rebounds in a loss to West Bloomfield.Brundidge also had 26 in a 70-50 win over Pontiac. Brundidge was 13 of 15 from the line in the win over Pontiac and drew praise from the opposing headcoach:

“I have a lot of respect for him,” Rogers said of Brundidge. “I really like coaching against him because he’s such a great competitor.”

Nance had 14 points in a 54-49 win at Wadsworth. Nance also had 16 points in a 53-35 win over Tallmadge. Revere has a huge game on the docket this week as the Minutemen travel to face 16-2 Buchtel on Tuesday night.(Photo: SportsInk)

Bielfeldt had 13 points as Notre Dame routed Sterling to remain undefeated on the season. Bielfeldt has yet to decide if he wants to take the Illinois offer and discusses the process in this video.

Robinson had 15 points thanks to 9 of 12 free throw shooting in a 53-48 win over Michigan City. Earlier in the week he battled through a frustrating night to a 15 point game in a win over Portage. (Photos: NWI Times)

Hawkins had a monster 26 point performance in a big win over Class C No. 1 win over Detroit Consortium. He was interviewed after the game here. (Photo: MLive)

Hawkins also had 12 points in a 43 point victory over Linden.

Hare helped Arthur Hill to a 30 point rout of Midland Dow and recently picked up an Alabama offer.

McGary had 11 points and 12 rebounds for Brewster in the New Hampton Invitational. However, Michigan doesn’t appear to be among the talented post prospect’s favorites:

Sheldon had 33 points in a big win over Gaylord.