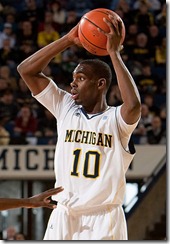 Michigan’s Tim Hardaway Jr. earns his second consecutive weekly award and third overall after averaging 20.0 points, 2.5 rebounds, 3.5 assists and 1.5 steals per game. The freshman shot 56.5 (13-of-23) from the floor, 55.6 percent from long range (5-for-9) and 90.0 percent from the free-throw line. In Michigan’s 75-72 overtime victory against Iowa, Hardaway scored a career-best 30 points, going 9-for-14 from the field, including a 5-for-7 performance from long range. His performance made him the first Michigan freshman to hit 30 points in a game in 33 years.