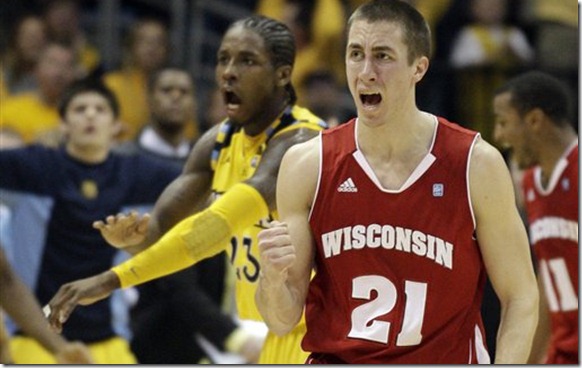 We like to do question and answer sessions for big games, so it was convenient when Phil from Bucky’s Fifth Quarter requested we do a feature for Wednesday’s showdown at Crisler Arena. They run a great site that covers all things Wisconsin and it is definitely worth a read from time to time. To start with, you can find my answers to his questions over there. Now, here’s your Badger talk.

Jordan Taylor is by all accounts phenomenal…. What are his two greatest strengths and what would you say are one or two weaknesses?

One of Taylor’s greatest strengths is his physical strength. Everyone can see he’s built like a running back. That ability to absorb contact is part of the reason Taylor can finish so well at the hoop. His strength also helps him protect the ball against pesky defenders, keeping his turnovers to a minimum. Another advantage for Taylor is his attitude. He stays in control of the game because of his confidence in his own abilities and those of his team. Taylor keeps his emotions in check but at the same time is almost always smiling. He is a great leader who has earned the respect of his team and makes the other four guys on the floor better.

By Taylor’s own admission, he waited too long against Purdue to hunt his own shot, which is odd considering he had just carried the Badgers against Ohio State. Taylor is not the quickest point guard either. We recently saw the relentless Lewis Jackson bother Taylor with his tight defense and quicker feet.

Wisconsin has been a bit inconsistent on the road, losing to Illinois, Michigan State, Penn State, and Purdue and almost losing at Iowa, what has gone wrong on the road?

Maybe it’s just because I’ve heard Bo Ryan say this so many times, but I’m inclined to believe it’s just a matter of making open shots. Take a look at the difference in true shooting percentage some time. The other half of the equation though, is when the outside shots are not falling, you have to manufacture even better looks closer to the basket. Wisconsin has not done a good job of getting to the free throw line away from home. Too often the Badgers will settle for decent looks from outside even when they should try a little harder to get layups or freebies. The first half at Iowa was one of the best examples of that.

Josh Gasser might be one of the most overlooked players in the conference as he quietly influences the game in a number of ways. Breakdown his game.

There are certainly a lot of very good freshmen in the league playing more prominent roles, but Badger fans have quickly grown to love Josh Gasser for doing all the little things right. A former high school quarterback, Gasser is a tough, underrated athlete first and foremost. He is a great rebounding guard who makes his free throws who has made big strides in his weaknesses — outside shooting and overall defense — this season. Trademark Gasser plays include diving on the floor for a loose ball and getting the timeout, making the extra pass that no one else saw developing and finding an easy basket underneath the rim thanks to a hard cut.

This might come as a surprise to most, but Wisconsin attempts a very similar proportion of threes to Michigan. The Badgers attempt 41.4% of their field goals from long range while Michigan fires up 41.9% from distance. How do Wisconsin fans about the three-happy-Badgers that we’ve seen the last couple years?

I actual started previewing games earlier this year with an eye on the 3-point phenomenon, inspired by the Michigan-Wisconsin comparison. At the time, we really only had non-conference data to chew on and I argued that the Wolverines were cheating themselves by firing up so many threes. But they have improved to the point where it makes more sense. In general I think most fans recognize that this is one of the better shooting teams Wisconsin has seen in a long time, mostly thanks to the sweet strokes of big men Jon Leuer and Keaton Nankivil. So while it is frustrating at times, this is how both of these teams have been built to win games. I incorrectly expected a slight return to normalcy from the Badgers this season, but it will have to wait.

Pretend you are game planning against Wisconsin, what are your keys to stopping the Badgers?

Let Leuer and Taylor get their buckets, to a point, and make a guy like Mike Bruesewitz or Tim Jarmusz beat you. Make Leuer less efficient by muscling him out of prime position on the block — his lack of lower body strength makes this very possible. On offense, quicker perimeter players can give Wisconsin some problems, but the help defense is usually solid. So that means you must master the mid-range game once you gain the first-step advantage. Obviously teams have to match Wisconsin in avoiding turnovers because you don’t want the Badger offense to get more cracks at the hoop.

Do you have any explanation why Michigan and Wisconsin’s games have been more competitive in the Kohl Center than Crisler Arena over the last three years?

Honestly, I have no idea. Beilein is a smart guy and he has gotten his team prepared well enough to win several big games in the last few years despite a so-so overall record. Maybe they respond better to bigger challenges. Playing Bo Ryan at the Kohl Center is definitely a biggie.