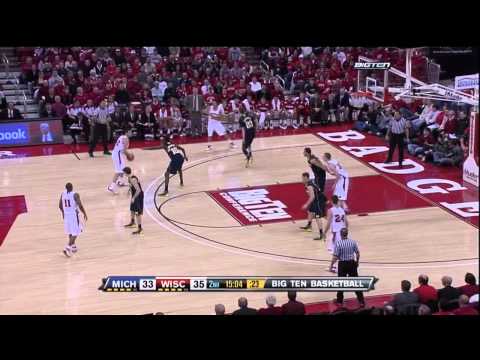 We’ve discussed the importance of this game ad nauseam, and all of the talk about “statement wins” or Michigan’s tournament resume becomes a bit stale without actual wins. We’ll save all the bubble talk for another day and try to figure out what exactly Michigan needs to do to win this game. If you follow this blog, you probably have a good understand of Wisconsin and the slow-paced uber-efficient style of basketball that they play.

The Badgers don’t just have the most efficient offense in the Big Ten; they have the best offense in the country. Wisconsin is scoring 1.19 points per possession in conference play and also plays the game at a slower pace, 58 possessions, than any other Division I team. The Badgers are a good, not great, shooting team with an eFG% of 52.1% – 49% on twos and 38% on threes – and rank seventh in the league in terms of getting to the free throw line and offensive rebounding. So what makes Wisconsin so good? They don’t turn the ball over. Wisconsin has turned the ball over on just 12.3% of their possessions in Big Ten play this season. They also make a Division I best 83% of their free throws. Wisconsin won’t beat itself, that much is certain.

Defensively, Wisconsin keeps it simple. The Badgers force opponents into bad shots, with a 49% effective field goal percentage allowed, and clean up the mess with a Big Ten best 71.7% defensive rebounding percentage in conference play. Wisconsin is the second worst Big Ten team at forcing turnovers, with just a 15.1 forced turnover rate, but that is more due to style than anything else. Wisconsin isn’t going to play an over aggressive attacking ball pressure defense, the Badgers are content to sit back and make you work incredibly hard to find an open look. Combine Wisconsin’s strong and physical nature with their discipline and execution and you have an awfully tough, if not overwhelming, defense.

Personnel wise it all starts with Jordan Taylor. The junior point guard is often content to sit back early on, preferring to let the game come to him, but he can hit a few triples in a flash that will completely change the complexion of any game. Taylor is the epitome of efficiency as he sports the ninth best offensive rating in the country and seventh best turnover rate; he’s also a 41% three point shooter to boot. This video says it all:

While Wisconsin still has a number of prototypical 6-foot-4 to 6-foot-6 players that you’ve never heard of that still manage to make huge plays – Mike Bruesewitz, Tim Jarmusz, Josh Gasser, Ryan Evans and Rob Wilson to name a few – they also have one of the best inside-out big men in the country in Jon Leuer. Leuer shoots 51% on twos and 43% on threes (49/115) and is athletic enough to take slower big men off the dribble. 6-foot-8 245 pound Keaton Nankivil joins him down low and he is one of the most deadly pick-and-pop bigs in the Big Ten. Nankivil shoots 48% on threes and recently scored 22 points on 5 of 5 three point shooting versus Penn State.

Wisconsin’s style of the play puts more importance on every individual possession. The Badgers can afford to do this because, for the most part, they don’t have defensive breakdowns, take bad shots or commit sloppy turnovers. Bo Ryan is confident that his team will make fewer mistakes than your team and by slowing down the game his team makes the most off its opponents’ mistakes. Michigan’s offense has proven that it’s capable of limiting turnovers, and making a few shots isn’t an unreasonable goal, but the problem lies on the defensive end.

Wisconsin’s swing offense has worked to perfection during Wisconsin’s last two visits to Ann Arbor. The Badgers scored 135 points in 111 possessions over those two games combined which divides out to 1.22 points per trip with an eFG% of 66% – 62% on twos and 49% on threes. Simply put, Michigan hasn’t come close to stopping the Badgers in Ann Arbor. It’s obviously a small sample size, and Michigan has defended Wisconsin better in Madison, but that doesn’t make the numbers any less daunting. The Wolverines will need one of their best defensive performances of the year and they’ll also probably need Wisconsin to miss a few open shots as well.

If Michigan can get stops, they have a chance to win this game. If Wisconsin comes out of the tunnel firebombing and scores on the first 10 possessions of the game, well, it’s going to be a long night. Pomeroy likes Wisconsin, 62-57 in a 54 possession battle, and gives Michigan a 29% chance at the upset. Michigan has come painstakingly close to a big upset this year, whether versus Syracuse in Atlantic City or Ohio State and Kansas in Crisler Arena, but the clock is ticking.