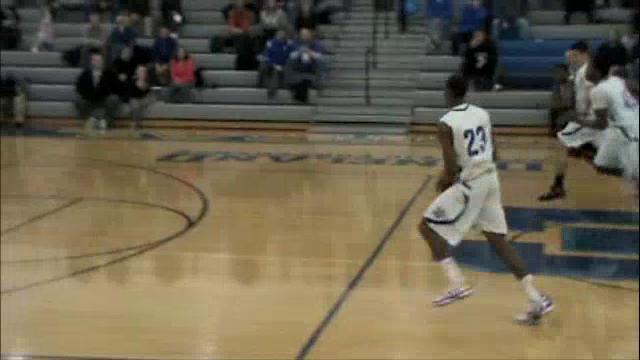 Tuesday night I got the chance to watch Michigan commitment Glenn Robinson III and his Lake Central team take on Hammond Morton at home. Lake Central won in convincing fashion, 71-48, led by Glenn Robinson’s 29 points and 9 rebounds. Here’s video from Robinson’s performance with a full scouting report after the jump. Make sure you also check out our post game video interview with Robinson.

Strengths: Tuesday was a great night (13-20 from the field) for Robinson. Robinson was hot from all over the court, throwing down dunks, knocking down 3-pointers, and converting tough baskets around the rim. In what was perhaps the play of the night, the 6-foot-5 Robinson nearly dropped a defender using a sweeping right to left crossover and pulling up at the left elbow for a mid-range jump shot. Robinson was efficient from the field and only forced one jump shot on the night, a pull-up in transition early on. Moving a little closer to the basket, Robinson used screens and cuts well, ran the floor in transition, and attacked off the bounce to get easy baskets in the paint. He showed off his athleticism and length on multiple occasions, throwing down a complete highlight reel of dunks in Tuesday’s game. The forward was also active on the offensive glass, pulling down 5 rebounds and converting multiple second chance baskets in the paint. Defensively, Robinson’s length and quickness allowed him to play the passing lanes and disrupt the flow of Morton’s offense. Early in the game Robinson tipped a pass toward half-court, chased it down, picked up the ball and finished with a one handed slam in transition.

Needs Improvement: Robinson can be timid with the ball from time to time in transition. On one occasion he settled for a 17′ pull up jump shot instead of attacking the defender on a fast break. On another occasion Robinson backed out of a chance to attack a defender in transition, instead passing it to a trailing teammate. At 6-foot-5, Robinson is a more than adequate ball-handler and could look to take advantage of these situations to get easy baskets or earn trips to the foul line. The only other area where Robinson struggled was converting put back lay ups. He earned some second chance points, but also missed some easy put backs right around the rim. With added strength Robinson should further improve his already solid ability as a finisher around the rim.

Final Thoughts: This was a great performance for the junior forward. He looked much more confident and comfortable than when I saw him in December. Robinson flashed a versatile game and confused defenders by scoring in every way possible. He shot the ball well and smart, not forcing many jump shots against the defense. Robinson also showed off his outstanding athleticism and length, throwing down four dunks in the contest. If Robinson continues to shoot the ball consistently, it will make him even harder to game-plan against, and even harder to stop. He just needs to continue to polish his overall skills and gain experience on the court. Physically, working to improve his strength and frame will help him in many facets of his game including defense and finishing. The future is bright for the future Michigan basketball player as he continues to impress.