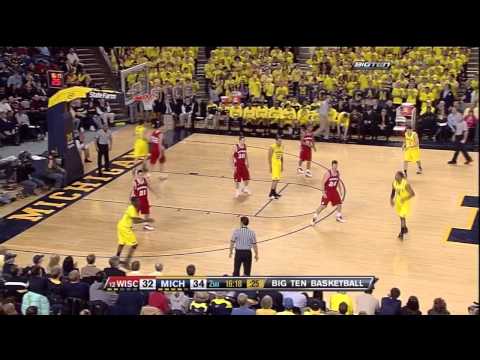 These two plays are a great way to illustrate how Michigan was able to get Jordan Morgan involved in its offense. It has been noted by many people that Michigan strongly dislikes dumping the ball into the low post. Morgan is usually the one who would be occupying that space, but you rarely see Michigan get him the ball on the block and let him go to work. The biggest reason for that is John Beilein doesn’t think Jordan’s ready for that, and he may be right. So while Jordan spends some time down low, he also spends ample time hovering around the free-throw line and the top of the key. This is where Beilein really likes to have him because of the opportunities it opens up for the pick-and-roll. As you can see on the first play, Jordan hovers around the top of the key and receives the ball. Tim Hardaway Jr. runs his man through two picks (by Darius Morris and Stu Douglass) before getting the handoff from Morgan, which functions as a third pick. Morgan rolls expertly to the basket and Tim finds him for an easy dunk. The second play was just great recognition by Zack Novak. After Novak drew Morgan’s defender on the drive, he dumped the ball off to an open Jordan who finished strong.

The goal here is not to dump on Darius, since he obviously had a few plays he would love to have back. But this stretch was absolutely crucial for Michigan. This was one of many points in the game where it felt like the Wolverines really had a chance to get something going and open up a lead with some cushion but just couldn’t pull it out. It’s almost halfway through the second half and Wisconsin has come back to take the lead when Matt Vogrich knocks down a great look at a 3-pointer after running through two picks from Hardaway and Morgan. Michigan takes a tough Jordan Taylor bucket and a Morgan miss, then comes back down and gets a triple from Evan Smotrycz, a huge shot. At this point, Crisler was rocking and the lid was about to blow off the place. On Wisconsin’s ensuing possession, Jordan Morgan plays outstanding on-the-ball defense on Jon Leuer and forces a miss. Darius ends up with the ball on the fast break and promptly turns it over, throwing a pass much too far ahead of Vogrich. Hardaway appeared to be a much better option on the near side, where he might have had a chance to dunk the ball. This was a perfect illustration of how Michigan had its chances to make sure this game didn’t come down to the wire like it did, but in the end just couldn’t take advantage.

What a shot by Tim Hardaway Jr. The game was back and forth down the stretch and Michigan was struggling a bit to keep pace with the Badgers at this point. The crowd was a little out of it after seeing Wisconsin take the lead a possession earlier and the Wolverines desperately needed a basket. Like he’s done so many times this season, Tim Hardaway took matters into his own hands and stepped up big. He makes a pretty simple move here at the top of the key, but makes excellent use of his extremely quick release and high release point. Hardaway shows the ball like he’s driving to the basket to create just enough space between him and his defender to bring the ball back in and get the triple off with a hand in his face. Hardaway nailed the shot and put Michigan up two points with a little under four minutes to go. In a game in which every possession is of the utmost importance, it doesn’t get much ballsier than this play. It was clear Michigan was looking toward Tim and Darius fro offense late, and Tim came through in a big way on this possession.

These possessions really speak for themselves. Yes, Michigan was trying to burn some clock. However, Michigan still managed to work its way into a pretty good offensive set. Isolations for Tim Hardaway Jr. and Darius Morris. Wisconsin made some really solid defensive plays and Michigan just couldn’t find the basket. Finally, the free throws. Up two with 30 seconds going to the line to shoot one-and-one means, generally, that you’re in control. It means you are in a position to win. You have momentum when the other team starts fouling. Boy, do things change quickly if you miss that first free throw like Darius did. Free throws have been a major issue late in the season, with the near-meltdown against Indiana at home in which the Wolverines shot 41 percent from the line during the second half and the Illinois game in Champaign with four missed second-half free throws coming to mind. The Indiana game came dangerously close to being an ugly loss and the Illinois game could have been a victory if Michigan knocks a few down from the charity stripe. On the other hand, Jordan Morgan, a 53 percent free throw shooter, knocked two down to force overtime in Iowa City, so there you go. Darius’ shot was halfway down before it rolled out. Just the way it goes sometimes.

This has been dissected and put under a microscope for days, and I don’t really have much new to add. There was a botched switch when Stu Douglass went to help on Jordan Taylor, but it can’t be denied that that is what you want to be doing: making sure Taylor isn’t the one taking that last shot. Stu got a hand on the ball while he and Tim were harassing Taylor on the perimeter, and Taylor made a great play to find Gasser, a freshman who shoots 28 percent from 3-point range, and Gasser got extremely lucky and banked the shot in unintentionally. It was a crazy shot with Stu flying by his face and it went in because those kinds of shots go in sometimes. I think it’s largely useless to spend too much time breaking down what could and couldn’t have been done to ensure what happened wouldn’t happen, just as I felt about the Evan Turner shot from a year ago. These shots happen sometimes, and there isn’t always someone to point a finger at.