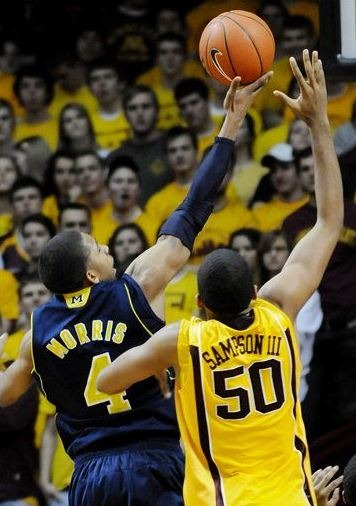 Here are a few early thoughts from Joe. We’ll have some more tempo-free centric thoughts from Dylan posted later tonight or early tomorrow.

It’s safe to say that Michigan’s game against Minnesota in Ann Arbor was the turning point of the season. After playing perhaps their worst game of the year against the Gophers on Jan. 22, the Wolverines held a team meeting before traveling to East Lansing and beating the Spartans. They haven’t looked back since, and Michigan’s 70-63 win against Minnesota at The Barn couldn’t have been a more prominent display of how much this team has improved over the final third of the regular season.

Michigan started the game in a similar fashion to many recent games, getting off to a blazing-hot start from beyond the arc in the opening minutes. Tim Hardaway Jr. was unconscious, nailing four 3-pointers in the first five minutes of the game. But after building up a 12-point lead, the Wolverines went scoreless for the last 5:38 of the first half, during which time Minnesota crawled back with a 10-0 run to cut Michigan’s halftime lead to 35-33. After halftime, it was a dogfight. Michigan simply made the big plays down the stretch that they needed to make to leave with a win.

Darius Morris kept the Wolverines alive with 11 of his 17 points in the second half when nothing was falling for anyone else. Jordan Morgan, Zack Novak and Matt Vogrich all came up with some huge defensive rebounds late in the game. Zack Novak carried the team down the stretch: he nailed an NBA-range 3-pointer at the shotclock buzzer to put Michigan up two with 1:39 to go, then made a great play to steal an entry pass to Ralph Sampson III on the other end and threw a pinpoint pass to a streaking Darius, who finished at the rim and got the foul. Novak has really struggled on the offensive end in recent games, but there’s no doubt that his heart and sheer determination not to lose inspires the rest of this young roster.

Michigan has been great on the road all year with wins at Clemson, Michigan State, Penn State and Iowa and this game proved no different (all coming after a loss). The Wolverines played with toughness and moxie in the face of a very impressive effort by Minnesota. This season is actually the first in which Michigan has won four Big Ten road games since 2002-03. Michigan and Minnesota were both coming off of heartbreaking losses at home, but neither played like it. Each team got the other’s best shot, but Michigan landed the final punch. We saw great performances from Tim Hardaway Jr. (22 points), Darius Morris (17 points and seven assists) and Stu Douglass (12 points). And while Zack didn’t fill up the box score, he had six points and five rebounds, as well as the two biggest Michigan plays of the game. Novak was clearly outmatched physically against Minnesota’s bigs but he battled the whole night and made a huge steal at the end. With this win, Michigan keeps NCAA tournament bubble scenarios alive and sets up what could be the biggest game against Michigan State in recent history, at home next Saturday.