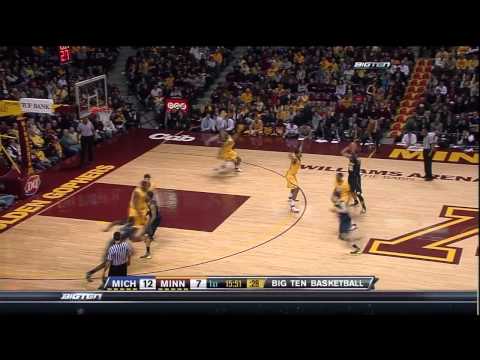 1) Tim Hardaway Jr.’s four made 3-pointers in the first five minutes of the game

Usually, Tim Hardaway Jr. reserves his scoring runs for the ends of games. In Michigan’s game against Minnesota on Saturday, Hardaway figured, “Why wait?” and let it fly early. The great thing about these four 3-pointers was that while they weren’t all wide open, there was enough space for all of them and they all could be called shots “in rhythm,” something that’s very important to John Beilein. Beilein has often said he doesn’t mind shooting a lot of 3-pointers as long as they’re “rhythm 3’s,” and Tim’s shots all appeared to come within the rhythm of the offense. The first shot was wide open, the second came as a result of good ball movement, the third came off of a screen from Jordan Morgan and the fourth was a result of excellent recognition by Zack Novak. Tim ended up leading all scorers with 22 points, with 15 coming off of first-half triples. These shots all came within the first five minutes of the game and gave Michigan a nice early cushion to work with, though the cushion disappeared by the end of the first half.

2) Darius Morris early in the second half

Minnesota found itself at the end of the first half and played pretty well the rest of the game. The second half was when the Gophers should have put some distance between themselves and Michigan — Michigan couldn’t hit anything and some Wolverines were even missing easy layups inside. But Darius Morris, nearly by himself, prevented Minnesota’s run from happening with timely buckets in the paint early in the second frame. After Jordan missed an early layup, Darius basically said, “Fine. You guys don’t want to finish inside, I’ll do it myself.” From there, Darius makes a great play to grab his own miss and put it back (among three Gophers, by the way). He continued to force the issue in the paint, consistently taking Blake Hoffarber off the dribble and establishing himself inside. It was clear that John Beilein wanted to move away from relying on 3-pointers as much as Michigan did in the first half, and Darius executed the game plan to get the ball inside. He has been so good all year at getting buckets in the paint and showed off that ability with these plays.

This is why Zack Novak plays 35 minutes per game. We are about to enter a series of plays here in 5 Key Plays that could be termed “The Novak Zone.” Zack was the game’s most important player late in this game, and rebounds like this one were a big reason why. Teams like Minnesota provide an especially tough challenge to the undersized forward. Minnesota is an especially long and athletic Big Ten team and Zack gets to spend all game fighting with the bigs down low for rebounds and entry passes and everything else. This rebound was just an especially awesome example of how the guy fights and fights all game long and doesn’t really care who likes him or doesn’t like him by the end of it. His willingness to do whatever it takes to win (or, as Zack might see it, not lose) is truly inspiring to his teammates. Plays like these are what makes him leader in every sense of the word.

After the stretch of awful shooting Zack has had to endure the past few games, it was really great to see him hit one like this. It was reminiscent of the Michigan State game, where Zack seemed to hit a clutch 3-pointer whenever Michigan needed it. The Wolverines couldn’t have needed this triple more than right then — down one with a minute and a half left in the game and the clock winding down. Darius of course does a nice job of drawing defenders to him when he drives to the paint, though he is just a bit late in recognizing Zack is open on the perimeter. But once Darius does realize it, he gets Zack the ball quickly and Novak fires from NBA range. The shot put Michigan up two in the final 1:39 of the game. This has to be considered the play of the game…

…Unless this one is. Zack Novak’s play on these consecutive possessions was just phenomenal. The junior nailed an incredibly clutch 3-pointer in the final minutes, then comes back down the court and steals an entry pass to Ralph Sampson III who, by the way, is about seven inches taller. Not only does Zack steal the entry pass, but he immediately recognizes Darius is streaking downcourt unguarded and throws him a Denard Robinson-esque touchdown pass right in the breadbasket. But of course this play wasn’t all about Novak. Darius showed some amazing awareness after he received the pass to slow down and wait for the inevitable contact, which he shrugged off while making the layup — and almost more importantly, the free throw. Just an outstanding play by both guys. This bucket came with just under a minute left and pretty much sealed the deal for Michigan. This is a great example of one of those plays Beilein always talks about that you have to make if you want to win on the road in the Big Ten. Michigan has been great this year at making them when they need to and picking up key road victories.