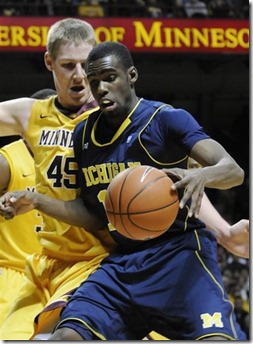 Joe already touched on most of the basics, but here is a more in depth look at the numbers from Michigan’ 70-63 win in Minnesota. These numbers don’t show the heart, resilience, and mental toughness that this Michigan team has exhibited. There have been a number of tough losses that could have derailed this season, but Michigan continues to stay the course and battle every night.

Michigan’s offense was really clicking. Early in the game it was the ridiculous hot shooting but, as Minnesota adjusted, the focus shifted in the second half. Michigan attempted 76% of its first half field goals from three point range but that number shifted to 23% in the second half. Michigan shot very well from three point range, 43%, and was 13 of 27, 48%, from inside the arc. The Wolverines turned the ball over on just 9% of their possessions and rebounded 22% of their missed shots. Michigan rarely got to the line but made the most of the charity opportunities, connecting on 8 of 9 attempts.

Michigan’s defense wasn’t great, surrendering 1.08 points per trip, but the Wolverines gutted out enough stops down the stretch to escape with a win. The Gophers rebounded 36% of their missed shots, 53% in the second half, but it wasn’t enough. Minnesota had just 9 turnovers, dividing out to a turnover rate of just 15% which is the best mark for Minnesota all year. In the end, the difference was Michigan’s ability to keep Minnesota off of the free throw line. The Gophers rely on the charity to provide a significant portion of their offense and only attempted eight free throws in this game.

I’m not going to do a complete player bullets section but a couple players deserve specific recognition. Darius Morris was phenomenal and really took control of this game when Michigan could have let it slip away, He scored 11 second half points on 5 of 9 shooting and finished the game with seven assists to just one turnover. Tim Hardaway Jr. continues to grow into a scoring machine, scoring 22 points on 7-11 (5-8 3pt) shooting. Minnesota made the mistake of not designing its defense around Hardaway and he made them pay early on. Zack Novak obviously made the big plays down the stretch and also grabbed five defensive rebounds. Stu Douglass provided a huge lift with his shooting, connecting on 4 of 8 triples. Matt Vogrich, Colton Christian, and Evan Smotrycz all provided some production off the bench. Smotrycz grabbed five boards, Christian three, and Vogrich two. Vogrich also knocked down a three and had a pair of assists.

A loss could have effectively ended Michigan’s at-large hopes but a win allows them to live another day. Saturday’s game against Michigan State looks to be one of the most important rivalry games for both teams in recent history. Not only could Michigan sweep the Spartans for the first time since 1997, both teams are still playing for an NCAA tournament berth.