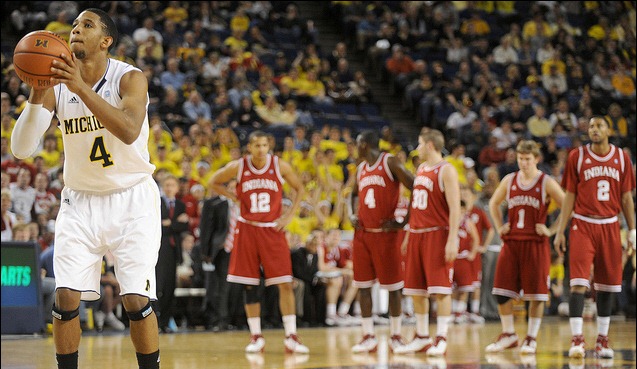 Michigan didn’t do enough to earn a bid last week, but a split was enough to keep its hopes alive heading into the final week of the regular season. Despite Michigan’s absence from most brackets last week, the Wolverine appear to have opened some eyes this week with a big win at Minnesota. Most bracketologists appear to have Michigan listed somewhere between the last four in and first four out.

What does Michigan need to do to remain in the picture? Beat Michigan State and win at least a game in the Big Ten Tournament. A Michigan State win would likely push Michigan into the 4-5 game with a match-up against Illinois. Winning both of those games would add a pair of top 50 wins to Michigan’s resume and provide a nice boost heading into Selection Sunday. No small task but not really unreasonable either. That might not cement Michigan’s tournament spot, but it would put Michigan in a very good position.

We have a full run down of where Michigan lands in the brackets of a number of notable national experts after the jump. Remember that these are projections as of right now and don’t include any predictions of what the future may hold.

Crashing the Dance: 2nd Team Out

Bracket Matrix: Next Four Out

Eamonn Brenann (ESPN): “Huge road win for Michigan, and an even bigger loss for Minnesota. The Wolverines have been quietly (OK, not quietly, because Michigan fans e-mail me more than any non-BYU fan base in the nation) making a late-season push for at-large consideration, and this win will only boost that case. In fact, the Wolverines are probably, if only barely, in the tournament right now. A home win over Michigan State in the regular-season finale might very well seal it.”