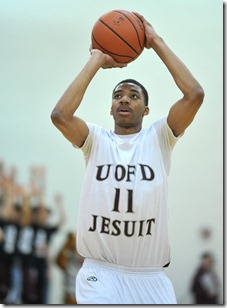 Chris Jenkins is a versatile wing out of U of D Jesuit High School, Jordan Morgan’s alma mater.  I got a chance to talk with him about the recruiting process, what he thinks of Michigan, and his relationship with Morgan. (Photo: Detroit News)

Describe your game. I kind of changed my game from last year. I’m really letting the game come to me. I start the game by shooting a couple of jumpshots to see if my shot’s falling. If it’s not falling, I turn into a slasher — I slash to the basket and I try to get some midrange shots in there and try to take it to the hole to get to the free throw line. But if my shots are falling, then it’s going to be a long day at the 3-point line (laughs).

How’s the high school season gone for you? Well, at the beginning of the season we changed our playing style, so it took me a long time to actually getting used to playing in a motion, dribble-drive offense. But I kind of got the hang of it now the second half of the season and we’re going to the playoffs now. Our season started off kind of rough — the last couple games have been rough — but we’re looking to bounce back in the playoffs.

Michigan coaches have been talking with you, correct? Yes, they have.

What other schools are showing interest in you? I’ve got offers from U of D Mercy, Duquesne and Central Michigan, currently. But I get a lot of interest from Xavier, Illinois, Providence and U of M.

Have you gotten a chance to visit Michigan? Yeah, I’ve visited a couple times. I went to some football games and hung out with the coaches.

What did you think? I really liked my visit. I know coach Beilein was talking to me about the arena that’s going up there (the Player Development Center), so I’m really looking forward to that.

Any other visits planned for the near future? Oh yeah. Yeah.

How do you see yourself fitting into Michigan’s offense? I see myself fitting in perfectly because I can shoot the 3 and I can also get to the basket so I can help at the free throw line.

Anything specific about your game you’re focused on improving right now? I’m currently improving on becoming a slasher. That was what my main focus was this year. Because in the past I’ve been known as a shooter, so this year I’ve really been working on being a slasher, getting to the rim and getting to the free throw line.

Any player people compare you to? Well (pause) there’s Kevin Durant (laughs). And my dad says he sometimes compares me to Paul Pierce because sometimes I feel like controlling the game and I can muscle for position.

What kind of a relationship do you have with Jordan Morgan? I actually played with him my freshman year on varsity at U of D. We have a very good relationship. I really look up to him, ever since I was in seventh and eighth grade and he was in high school, so walking into freshman year it was like, "whoa, I’m playing with Jordan Morgan." I really look up to him as a really good role model in education as well as on the basketball court because of the work ethic he has.

Have you been able to watch him this year? How do you think he’s played? I think he’s playing really well. He’s more calm than he was in high school, not forcing anything. And that’s really good for Michigan.