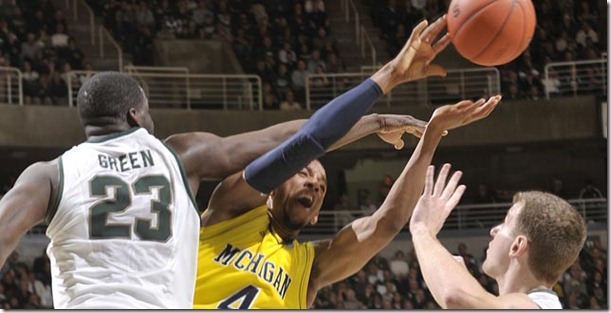 “That’s a game that can turn your season around” – Zack Novak after Michigan beat Michigan State in East Lansing.

The differences between this Michigan team and last year’s team are best illuminated by how their seasons turned at the end of January. Michigan hosted Michigan State around that time last year and lost in devastating fashion as DeShawn Sims’ desperation layup rolled off the rim at the buzzer. The loss moved Michigan to 10-10 (3-5) and they would only beat two other teams, Iowa (three times) and Minnesota (twice), over the next two months. That regular season ended with a disheartening loss at Michigan State that looked more like a Spartan victory lap than an actual game. Michigan scored just 14 first half points and the game ended with Michigan State’s seniors kissing the block-S in the middle of the court.

This year, Michigan traveled to East Lansing on the tail end of a six game losing streak and accomplished what felt impossible. The Wolverines won the game then used that momentum to kick off a 7-3 stretch over the next month. Now the Wolverines have a chance to complete the turnaround, clinch a Big Ten Tournament bye, and bolster their NCAA Tournament resume. All that lies in the way is their in-state rival, a team that has been to back-to-back Final Fours and is coached by a man that lives for this rivalry.

Michigan did a lot of things right in the first match-up. First off, the Wolverines shot the ball extremely well and managed to hit 52% of their twos and 48% of their threes. The second key to that game was Michigan’s ability to control the defensive glass, rebounding 74% of Michigan State’s missed shots. Shooting is obviously key in any game, but defensive rebounding is absolutely critical against Michigan State, the league’s second best offensive rebounding team.

Scoring the ball has been a laborious process for this year’s Spartan squad. Michigan State is scoring just 1.02 points per trip in conference play, a mark which ranks 10th in the Big Ten. The shooting numbers are even more grim as the Spartans are shooting 48% on twos (9th) and 31% on threes (9th) for a league worst 48% effective field goal percentage in Big Ten games. Turnovers were a huge problem for Michigan State early on but the Spartans have gradually improved in that department, turning the ball over on a respectable 19% (7th) of their possessions in conference play. The strength of this Michigan State offense is the same as the rest of Izzo’s teams: offensive rebounding.

Things have been a bit turbulent on Tom Izzo’s bench. Kalin Lucas limped into the season on a damaged Achilles. Chris Allen transferred. Derrick Nix almost transferred and didn’t travel to Maui. Durrell Summers has failed to find consistency. Korie Lucious was dismissed from the team and will transfer to Iowa State. Now, senior walk-on Mike Kebler has started the last four games.

Michigan State’s season has been declared dead multiple times but Kalin Lucas continues to lead the Spartans back. Lucas is averaging 21 points per game over the last 10 games and has done everything within his power to make up for Michigan State’s backcourt deficiencies. Durrell Summers is averaging just 7.6 points in those last 10 games and hasn’t reached double figures since January. Keith Appling has been up and down offensively but is coming off of an 18 point and six rebound performance on 7 of 8 (4-5 3pt) shooting, one of the best games of his career.

Michigan State’s defense hasn’t quite been elite this year but it has been good enough to win games. The Spartans rank fifth in the Big Ten, allowing 1.06 points per trip in conference games. As you would expect, Michigan State is a terrific defensive rebounding team that manages to grab 72% of its opponents’ missed shots. The Spartan defense does have some weaknesses. Despite holding opponents to 47% inside the arc, Michigan State has the 9th best free throw rate (FTA/FGA) allowed in conference games and has also allowed Big Ten opponents to shoot 39% from three point range.

The post season starts now if Michigan wants to make the NCAA tournament. A win will keep Michigan on the right side of the bubble while a loss would push the Wolverines into the NIT, barring a miraculous Big Ten Tournament run. Ken Pomeroy gives Michigan a 64% chance at victory and projects a 64-61 final. The fact that Michigan won in East Lansing obviously proves that the Wolverines are capable of winning this game. However, I still have that sinking feeling that something will go wrong. Here’s to hoping that the only thing wrong is my prediction: Michigan State 64, Michigan 63.