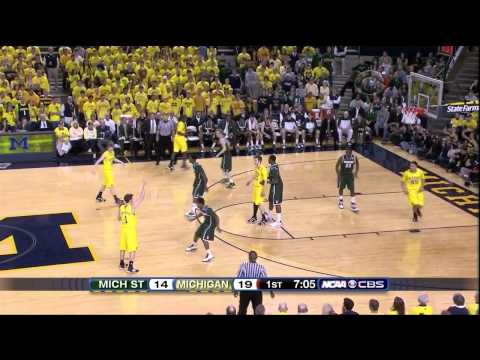 1) Tapout by Colton Christian to Matt Vogrich for the triple

﻿Similar to the game in East Lansing, Colton Christian entered this game and managed to make a huge play in limited time. John Beilein said after the game that Colton has the ability and athleticism to make plays like this, he just needs to learn how to play on the perimeter. But this play is a good example of what he can do while he’s on the floor: anticipate where the ball is going to be and put himself in position to make an athletic play. Here, Evan Smotrycz elects to take the 3-pointer when he sees a little bit of daylight, and Colton starts out on the perimeter. The second the shot goes up, Colton crashes the glass and maneuvers his way around Draymond Green, but he still isn’t in great position to get to the ball. Even so, he makes a heck of a play by getting in the air and getting a hand on it. He also shows great awareness, making sure to tap the ball out to Matt Vogrich, who’s open at the top of the key. Vogrich receives the ball and makes a subtle pass fake that sends Durrell Summers scattering after nothing. The end up result is a wide open triple that Vogrich knocks down with ease.

Tim Hardaway Jr. is a scorer, pure and simple. He does more than just score, of course, but he just knows how to put the ball in the basket. After going scoreless in the first half, never finding a rhythm and catching a Kalin Lucas elbow to the face, Hardaway came on the court in the second half with fresh legs and a bad attitude. He started things off with slamming home an alley-oop after getting a great screen from Jordan Morgan and the Spartan defense falling asleep at the wheel. The rest of his makes weren’t nearly as pretty — some were downright ugly — but he did what a scorer does: put the ball in the basket by any means necessary. There was the shot where Tim was leaning into two Michigan State defenders, and even one where Keith Appling (State’s best on-ball defender) made a great play to strip the ball but Hardaway regained control and got the tough lay-in.  Beilein had him running around and through numerous screens and it was clear the plan was to get Tim the ball. He took advantage and ended the game with 20 points — all in the second half.

Not only was this play fun to watch, it was one of the most important Michigan baskets of the game. The situation: Michigan State has cut Michigan’s lead, which was as much as 12 at one point, down to two points with just under six minutes to go in the game. Michigan looked lost on offense. So they went back to what they have done so well this season: the pick-and-roll. Tim starts with the ball on the perimeter and gets a screen from Jordan. Derrick Nix attempts to help over the top but Morgan slips the screen and flashes to the basket. Hardaway finds him and Nix is left standing in the middle of nowhere while Morgan finishes with authority. While we were at media availability on Friday, the players were drilling this exact screen-and-roll while media were talking with Beilein, and it’s clear they have it down pat. From this point on, Michigan was able to build a semi-comfortable lead and hold on down the stretch.

Starting with about three minutes left in the game, Michigan State controlled the ball for a little over a full minute — without scoring. The Spartans missed four shots and rebounded all four of them, including a missed front end of a one-and-one by Delvon Roe. It seemed like they just weren’t going to let go of the ball until they scored, until Draymond Green dribbled the ball off his knee and turned it over. This stretch illustrated two areas of the game — Michigan’s rebounding, which wasn’t great and Michigan’s defense, which was. Michigan played tremendous defense throughout the game, and this possession is an excellent example. The help on Green in the post was great, the shots State took were guarded and when Green drove to the lane he ran into three Michigan players and they forced him to turn the ball over. Michigan State was down just six at this point and could have cut the lead to four or three on this possession, but the Wolverines didn’t let them.

Michigan State is down five and has a chance to pull the game to within two or three with under 20 seconds left — but Michigan’s defense holds. There were a few places during this possession where it looked like a foul could have been called on Michigan, but if Tom Izzo thinks he’s going to get any of those calls under a minute left at Crisler Arena, he’s crazy. I’m generally a fan of refs swallowing their whistles late (barring something outrageous) and I was a fan of it here. First Michigan forced Kalin Lucas into an awful baseline shot, then the Wolverines got a huge block on Durrell Summers after he grabbed the offensive rebound. Evan Smotrycz might have made one of the biggest plays of the game as he manages to grab the ball and throw the ball off of Durrell Summers’ knee and out of bounds.

This is one is a bonus. Darius Morris saunters through the Michigan State defense with a pair of behind the back dribbles to officially put the game on ice. It’s also worth noting that a layup in the final seconds of a five point game, when the opposition has already tried to steal the ball twice, is far from unsportsmanlike.