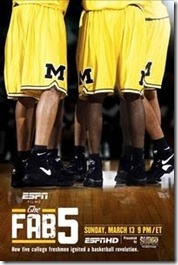 Jalen Rose was made available via conference call today to discuss the upcoming Fab Five documentary that will debut this Sunday at 9 p.m on ESPN. Rose produced the film which aims to give an unfiltered look at the Fab Five. Here are a few notes and quotes from the call.