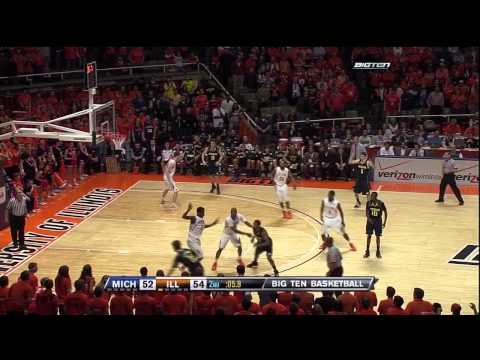 The Big Ten Tournament’s 4-5 game presents an interesting dynamic. Not only is the first round bye nice, you get a whole week to prepare for a known opponent rather than attempting to guess what team you will face. This game is even more intriguing because it’s just the second match-up between Michigan and Illinois and the first meeting in Champagne was decided by a missed buzzer beater. NCAA tournament implications just add to the stakes.

The first meeting was a slug fest. Both teams scored fewer than .9 points per possession and neither team shot the ball particularly well. The final score was just 54-52 in a painful 61 possession game. The notion that I’ve heard repeated by most Michigan fans is that “this is a winnable game as long as Michigan can shoot the ball better”. Unfortunately that’s not all too easy against Illinois.

The Illini have the best two point (45.2%) and three point (29.9%) field goal percentage defense in the Big Ten. There’s nothing complicated about it, the Illini have great length across the board with players like Tisdale, Davis, Cole and Richmond and it’s just hard to make shots against Illinois. Michigan’s bad shooting against Illinois wasn’t an anomaly; it’s a fact of life when you face Illinois. It’s not all doom and gloom, Illinois also forces the fewest turnovers in the Big Ten, a key reason why the Wolverines only coughed it up 5 times in Champaign and were able to stay close. Illinois is also just average at keeping opponents off of the free throw line and cleaning up the defensive glass, meaning that if you can make shots against the Illini you have a good chance of winning.

Illinois struggles in three of the four offensive factors as well, ranking ninth in turnover percentage, eighth in offensive rebounding, and eighth in free throw rate. At 1.07 points per trip, the Illini offense still ranks 5th in the league thanks to strong shooting numbers with an effective field goal percentage of 53% – 51% on twos and 38% on threes. Illinois is extremely talented but they boast the profile of a jumpshooting team that just doesn’t affect the game in enough other ways.

Illinois does pose some tough match-ups for Michigan. Mike Tisdale routinely has his way against Michigan and Demetri McCamey is capable of taking over any game with his deadly three point shooting. Those two scored 30 of Illinois’ 54 points in the first match-up and Bruce Weber has already made it clear in the media that he plans to get Tisdale involved early and often. The Illini utilized relatively simple high-low action to get Tisdale the ball in the first match-up, allowing much bigger four men to pass over Novak into Tisdale down low. Michigan will have to be prepared to make things difficult for Tisdale and also pressure taller Illini players at the top of the key to prevent the easy entry pass.

Non-McCamey Illini were 0-10 from three point range in the first match-up but there are some solid shooters on the roster. McCamey hits 45% of his threes in conference play and Tisdale sits at 45% (29 3PAs), Bill Cole 37%, Brandon Paul 35% and DJ Richardson 33%. Expect Stu Douglass to be tasked with slowing down Demetri McCamey. He has a size disadvantage inside but he is Michigan’s most reliable perimeter defender to make sure that McCamey doesn’t get loose from three point range.

Effective field goal percentage is the stat to watch in this game. It’s obviously the most important of the four factors but Illinois just doesn’t do enough else to make up for being outshot. If Michigan comes out hot and hits a few shots, the Wolverines have a great chance to win this game. Michigan was outshot in the first game but stayed close thanks to winning the turnover battle, so that should be number 2 on the priority list. Ten of Illinois’ 12 losses have come at road and neutral sites including losses to everyone from Missouri to Illinois-Chicago to Northwestern. This Illinois team is far from consistent and you never quite know what version you will see on any given night.

The importance of this game can’t be understated. No matter what the current bracketology reports say, Michigan needs to win this game. Lose this game and there will be 48 hours of waiting, watching games and praying. Win and the situation looks pretty bright going forward. This is the last semblance of control that Michigan has over its destiny and letting that slip away will lead to a couple sleepless nights and possible disappointment on Selection Sunday.