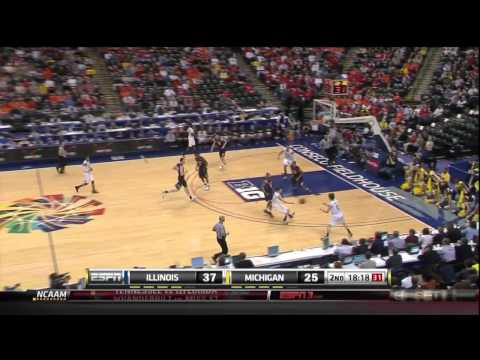 Zack Novak is one of Michigan’s players that tends to influence the box score by doing more than just scoring, but today he provided Michigan with a big boost offensively by tallying 14 points. Zack’s weapon of choice on offense was the long ball, and while there were certainly bigger shots in the course of the game, there were many times when the Wolverines appeared to be teetering on the edge and one of Zack’s triples brought them back. His first two 3-pointers went toward building Michigan’s initial lead. His first one was a good illustration of something the Illinois players talked about at length after the game, which was how much success Michigan had when they got out in transition. The two 3-pointers Zack sunk in the second half were big in that they kept the lead Illinois held for most of the game from ballooning into unmanageable territory. They kept Michigan within striking distance in the second half  which enabled the late Wolverine run.

Smot’s first 3-pointer could not have come at a better time. After Tim Hardaway Jr. cut the Illini lead to nine with a triple, Brandon Paul knocks down an extremely deflating 3 to recover the 12-point lead. It was around this time when the game seemed like it just might be out of reach for the Wolverines. But if they were on life support, Smotrycz’s 3-pointer on the next possession functioned as the defibrillator. Evan actually had two chances to take this shot on the same possession but passed on the first. His next 3, with about five and a half minutes left, came after a Darius Morris lay-in and a stop on the other end. At this point Michigan looked like they had some life and that they at least had a run in them. Then on the ensuing possession, Stu Douglass sets a screen on Evan’s man as Evan pops out to the top of the key, Darius finds him, and Smot drains on of the biggest shots of his young career. His triple cut the Illinois lead to just four points.

In the midst of Tim Hardaway’s emergence as one of the best freshmen in the country, it’s important not to forget that Michigan has not one but two scoring guards who can put the team on their back late in games. Darius was instrumental in today’s comeback, willing the Wolverines to scores on numerous occasions in the final eight minutes. Whether it was creating in transition, taking the ball to the hoop or pulling up for a mid-range jumper, Darius seemed to have the answer to every defense that Illinois threw at him. Morris had a great all-around day: he finished as Michigan’s leading scorer with 17 points, gathered four rebounds and dropped seven assists to only two turnovers. When Darius was off the court, the offense looked aimless; it might not have been that pretty even when he was on the floor, but at least it looked like there was some direction. Perhaps the best part of Morris’s late run? With just over two minutes left and Michigan down two, he went to the free throw line and calmly knocked down two freebies.

Just because Darius was the one who put the Wolverines on his back doesn’t mean Tim didn’t get in on the act as well. The situation: Darius sinks two free throws to tie the game with two minutes left. Evan Smotrycz makes a great play on defense by stealing an errant pass by Demetri McCamey to Mike Tisdale and getting Michigan out on the break. Darius drives like he’s going to the basket but sees Tim is open on the perimeter. Darius dumps the ball off to Tim, who buries the triple to put Michigan up by three with just over a minute and a half to play. Once again, while this wasn’t completely a “fast-break basket,” the Illini still didn’t have a chance to totally set their defense before Hardaway let the shot fly. It was a big reason why Tim was open, and opportunities to score in transition were a big reason Michigan was able to come back late in this game.

5) Zack Novak’s rebound in traffic to ice the game

On Illinois last real possession, the Illini still had a chance to tie the game after Smotrycz missed the front end of a one-and-one. It could have been disastrous, but Michigan played smart defense and let Illinois get the harmless two. Except Brandon Paul missed the easy lay-in and Zack grabbed the rebound like he grabs every rebound — fiercely. Novak elevated among multiple Illinois defenders and brought the ball down before calmly walking to other end and making his free throws.