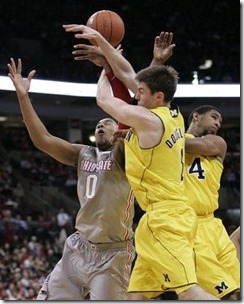 With the short turnaround and early tip off, you’ll have to settle for an abbreviated game preview. For more on Ohio State, make sure to read all of our stories from the first two games. The Buckeyes are good, likely the No. 1 overall seed in the NCAA tournament, but enter this game off a near upset scare versus Northwestern.

If you’ve paid any attention to college basketball this season, you know that Ohio State is talented. You know about Jared Sullinger, the overpowering freshman post player that willed Ohio State to victory over Northwestern by making 16 of 18 free throws. You also know about his experienced and talented supporting cast. David Lighty is one of the strongest guards in the league and will outmuscle just about anyone on either end of the floor. Will Buford can slash to the basket but also has a potent jumper while Aaron Craft is one of the best defensive point guards in the league. Add in Jon Diebler, who makes over half of his triples including a 17-20 stretch recently, and you have a complete, experienced and talented team.

There’s a reason that Ohio State has only lost two games this year – at Wisconsin and at Purdue – and they will be extremely tough to beat. If Michigan wants to strike upset gold, the Wolverines need to figure out how to negate what Ohio State does best. That means winning the free throw battle. Ohio State gets to the line more often than any other team in the league but also allows fewer free throw attempts than any other team. That sounds simple enough but Michigan ranks last in the Big Ten at getting to the line and 7th at keeping opponents off the line. Ohio State has an athleticism advantage at almost every position across the board which will makes things very difficult for Michigan.

There are a couple other areas where Michigan can be successful in this game. First off, the Wolverines need to hold onto the ball. Ohio State forces more turnovers than any other Big Ten team but Michigan has shown the ability to value the basketball and will need to cut down on the lapses in focus and bad passes. Michigan has done a much better job limiting opponents shooting percentages in the second half but will have it hands full with Ohio State’s Big Ten best 57.5% effective field goal percentage – 52.3% on twos (2nd), 45.2% on threes.

The first two match-ups are interesting because Michigan had half of the puzzle figured out in each game. In the first game, Michigan scored the ball efficiently but could never get stops. It was the fifth best offensive performance against the Buckeyes this year. In the second game, Michigan defended Ohio State extremely well, holding the Buckeyes to a 3rd-worst .98 points per trip of offensive production, but couldn’t score. To upset the Buckeyes in Indianapolis, it will take a perfect game on both ends of the floor. Michigan has proven that they can do it on each end, but now it’s time to put it all together.

Pomeroy likes Ohio State by a score of 71-60 and gives Michigan just an 11% chance at pulling the upset. It would take a near-perfect performance out of this team, but given the way they are playing now, it’s fair to say they have a puncher’s chance. An upset this afternoon would mean that Michigan would play for the Big Ten title against a team it swept in the regular season: Michigan State or Penn State.