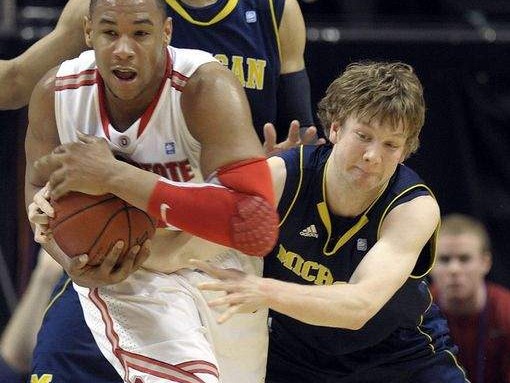 Michigan’s late season turnaround has been defined by poise but the Wolverines let that poise slip away this afternoon. Michigan had clawed back into the game, cutting the Ohio State lead to just two points, before unraveling long enough to see the game spiral out of control. Michigan allowed mistakes and frustration to snowball to the point of affecting subsequent plays. A couple timely baskets by Ohio State combined with those mistakes led to a 16-0 Ohio State run over five minutes that put the game out of reach.

The Wolverines will leave Indianapolis with a bitter taste in their mouths but there’s no denying that they took care of business at Conseco Fieldhouse. Michigan appears to have cemented an NCAA tournament bid and even reached the 20 win mark that Darius Morris predicted in January – when Michigan was four or five games under .500 in Big Ten play.

Offensively, Michigan scored 1 point per possession on the nose but a lot of that production was during Michigan’s late run. The Wolverines had an effective field goal percentage of just 45% – 43% on twos, 31% on threes – which just isn’t good enough to pull off an upset of this magnitude. Michigan did a good job limiting turnovers – 15% turnover rate – and even rebounded an above average 29% of their missed shots but that wasn’t enough to make up for the below average shooting.

While the offense falls under acceptable, the defense wasn’t good enough to receive a passing mark. Ohio State shot the ball well – 50% on twos, 36% on threes – and lived at the free throw line. The Buckeyes attempted 23 free throws but only made 13, one of the primary reasons that Michigan was able to hang around. Michigan was unable to force many turnovers and allowed Ohio State to grab far too many offensive rebounds (35% off rebounding percentage). The most painful aspect of the poor defensive rebounding was that almost every offensive rebound, Sullinger had 6, resulted in free throws or an easy layup for the Buckeyes.

Now the Wolverines wait until Sunday evening. Michigan will host a public viewing party at Crisler Arena beginning at 5 p.m. The Wolverines should feel very good about their chances of being selected, the only question seems to be where they end up and who they play.