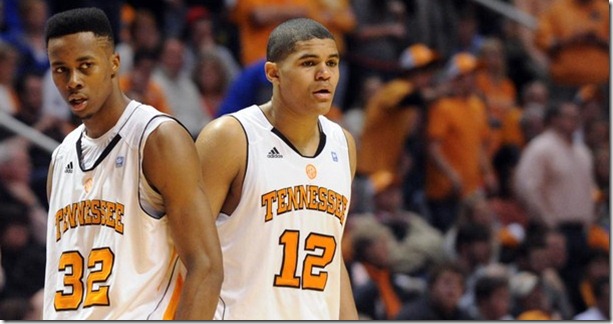 Most expected Michigan to grab a 10 or 11 seed in the NCAA Tournament but the committee awarded the Wolverines, 20-13 (9-9), with an eight seed in the west region.The eight seed is the fourth best seed awarded to a Big Ten team but doesn’t necessarily present the easiest path to the second weekend. Michigan will face Tennessee in the opening round before a potential match-up with the No. 1 seeded Duke Blue Devils.

Tennessee provides an intriguing match-up for Michigan, mainly because the two programs are so different – both on the court and at the end of the bench. John Beilein’s slow paced offense relies on three point shooting combined with precision cutting and passing. Bruce Pearl’s offense is more uptempo and interior focused with a roster of athletes that play aggressive defense. To add to their differences, John Beilein is more cool and composed on the bench and is the head of the NCAA Ethics committee. On the other hand, Bruce Pearl is fiery and brash and under NCAA investigation for lying to investigators over recruiting violations.

The Vols rank 55th on KenPom and appear to have the ability to win or lose any game. They have knocked off Pittsburgh, Vanderbilt, Memphis, Villanova, Georgia, and VCU but have also lost to Charlotte, Mississippi State, Arkansas, Oakland and the College of Charleston. They are capable of beating just about anyone when they are playing well, but don’t seem to play to their potential every night. Most recently, Tennessee has been losing more than winning, dropping 7 of the last 11 games.

Scottie Hopson and Tobias Harris lead the Vols in scoring

So what does Tennessee do well? Defend and rebound. The Vols surrendered only .98 points per trip in SEC play, the second best mark in the league. With the length and athleticism on the floor, four starters are 6-foot-6 or taller, it’s no surprise that the Vols can force opponents into low percentage shots, force turnovers, and clean up the defensive glass. The greatest strength of the Tennessee defense in SEC play has been defending the three point shot, SEC teams made just 31.2% of their long range attempts against Tennessee this year.

The Vols struggle to score the ball, averaging just 1.01 points per possession in SEC play, a figure which ranks 7th in the SEC and would rank 10th in the Big Ten, a better league. Tennessee is a bad shooting team – 47.5% on twos and 30.1% on threes – and rarely gets to the free throw line (FTR 33%, 10th SEC). The one thing that the Vols do well is crash the offensive glass, pulling down 37% (3rd SEC) of their missed shots in conference play. If they played in the Big Ten, Tennessee would be tied with Minnesota as the best offensive rebounding team in the league.

Teams that have topped 1.00 point per possession mark offensively are 11-4 against the Vols compared to 3-14 under. Similarly, teams that have shot better than a 50% eFG% are 10-2 versus Tennessee compared to 4-17 when held under. The Vols thrive in defensive struggles and just don’t have the offensive firepower to win shootouts. Michigan’s effective field goal percentage in conference play was 54% (2nd B10) and the Wolverines averaged 1.06 points per trip, if they can come close to those averages in this game they should have a very good chance to win.

Clemson, Michigan State and Minnesota are probably the teams on Michigan’s schedule with a statistical profile most similar to Tennessee. Clemson isn’t quite as good on the offensive glass but is better defensively while Minnesota’s numbers are skewed by their late season tumble. Michigan State is an equally horrendous shooting team and does a great job on the offensive glass but doesn’t force nearly as many turnovers. Michigan is 4-1 versus those teams, which could be a good sign.

Michigan’s offense is generally designed to take advantage of teams that play an over aggressive ball pressure style of defense. However, Michigan has struggled against some of these teams, like UTEP, because they aren’t comfortable with their counter moves (backdoor cuts, etc.). Luckily that game was eons ago and Michigan’s offense has improved significantly. Dealing with Tennessee’s athletic advantage will be a challenge but the Wolverines should feel confident if they are able to run their sets and hold their own on the defensive glass.