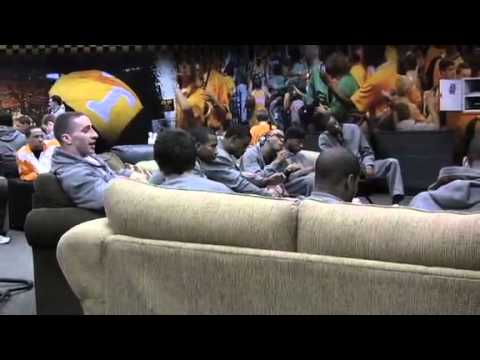 Given the foreign nature of this game and the relative unfamiliarity between both programs, we decided to take a look through the press clippings from Knoxville.  My first impression is that these two teams feel completely different about the 8-9 game. For Tennessee, ranked #20 in the preseason, there is relief to be in the dance despite a disappointing season. Compare that to Michigan, who vastly overachieved to reach this game. Here’s a video from KnoxNews on Selection Sunday with reactions from the players and coaches after being given a nine seed:

Much more after the jump, including several notes on how successful Tennessee’s scout team was during Monday’s practice.

It’s never good when a video titled “Out-Dribbled by Distraction and Disappointment” leads off your NCAA Tournament preview story. That probably means that fans have mixed emotions at best about the state of the program:

When Tennessee players were initially asked about Michigan, they didn’t have much to say:

“We can’t afford to look past Michigan; they beat Michigan State twice this year, and that tells you everything you need to know,’’ Vols junior Scotty Hopson said. “But it would be awesome to play Duke; that would be a big stage for us.’’

Their quotes after a day of practice were a bit more intriguing, as the scout team apparently scored points at will against Tennessee’s defense in practice. Here’s what Brian Williams had to say on Michigan’s offense:.

“Just putting it in today on our scout team, those guys were successful running that offense against us,” UT senior center Brian Williams said. “That offense is tough to check.”

The Vols’ basketball IQ and court awareness will be tested like never before this season.

“It’s tough; they set a lot of screens, they read screens well, they do back-door actions. There’s a lot they can do,” UT senior Josh Bone said. “It’s not just one play; there are a variety of movements, and you have to stay focused.

“I hope we can come up with something that can stop them.”

“I thought the scout team did really well,” Vols coach Bruce Pearl said. “Unfortunately, they did too well.”

“Michigan’s stuff is hard to guard, and it’s different than what we normally see,” Pearl said. “A lot of the principles that you need to have in the SEC about being away from your man and toward the ball and up lines, you’ve got to throw all that stuff out when you go up against that Princeton/Georgetown stuff. It was good to see it. We went against it. We’ve also taped it. What we’ll do now is we’ll put their action in our scout tapes, show our guys how we guarded it — where we guarded it well, where we struggled with it — and it’s going to have to be a learning process that will take place throughout the week, because we haven’t seen anything like this all year long.”

Even more (and remember, this is a scout team that had about 24 hours to learn Michigan’s offense):

Renaldo Woolridge was the perimeter shooting PF on Vols’ scout team today and looked good. Josh Bone: “Renaldo messed us up today. They’re getting wide-open shots, and we don’t know how.”

The opportunity is there for Zack Novak to score the ball. The Vols do realize that they have an advantage offensively at the four position with Zack Novak guarding Tobias Harris, the only question is how well they are able to exploit it.

“We’re ready for Tobias to have a big night in there, ya feel me?” junior guard Scotty Hopson said. “Obviously we want to expose that, because Tobias is obviously one of the best players on our team. We’re looking forward to getting the ball inside more and taking advantage of (Michigan’s) lack of posts.”

Added sophomore guard Skylar McBee: “We’ve got to go inside, because they’re a little bit smaller, so we have to kill them on the glass.”

All of that excitement seems to be intertwined with nightmares of  Time Warner Cable Arena. Tennessee lost to Charlotte in that same building this year and Louisville in the Sweet-16 three years ago.

“We haven’t won in that building during my career, and we shot the worst percentages there ever,’’ UT senior center Brian Williams said. “Hopefully, that will change.’’

Bruce Pearl also admitted that he is a fan of John Beilein’s 1-3-1 zone, admitting that he requested to visit with Beilein to learn a trick or two. Beilein wasn’t so keen on the idea and politely declined:

“I really like that 1-3-1 zone John runs, so three or four years ago we called him and told him we wanted to visit with him about it,” said Pearl, who isn’t shy about borrowing good ideas from coaches at the NBA and college level.

“John said, ‘I’ll send you all the tape you want, and I appreciate your interest, but generally speaking, we don’t visit with other people about what we do,’ ” Pearl said. “I was thinking about going to a 1-3-1 zone because our team was about to get longer.

John Beilein has excelled in NCAA Tournament situations because his system is so hard to prepare for in a short amount of time. By this point in the season, Michigan can throw a lot of looks at you offensively and defensively. Michigan can change up defenses – mostly running man with spurts of 1-3-1 and 2-3 zone – and has an offense that is endlessly complicated and intricate. There’s a reason that John Beilein routinely overachieves his seed in the NCAA Tournament.