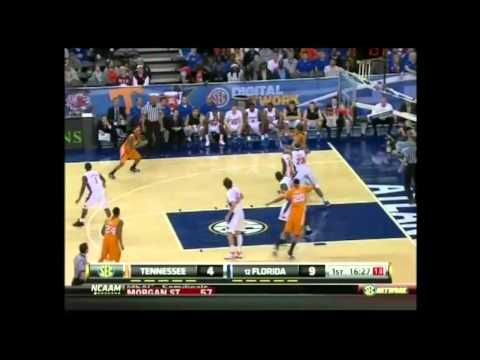 I fired up ESPN3 to watch film of Tennessee’s game versus Florida in the SEC Quarterfinals last week. The Vols lost the game, 85-74, but did manage to hang with the Gators until the last several minutes. Here’s a closer look at Tennessee as well as some video footage (provided by Josh Houchin) from that game.

Tennessee is a team full of scrappers and fighters. The Vols have tremendous length and quickness and make the most of it through their aggressive and gambling trapping defense. Tennessee extends on-ball pressure far beyond the three point line and is very active in the passing lanes. However, the Tennessee defense seems to collapse a bit too much in reaction to dribble penetration, leaving shooters open on the wings — a potential means of attack for Michigan. This is all vintage Tennessee basketball under Bruce Pearl.

Watching Tennessee play, it becomes very clear that their offense is largely dependent on forcing turnovers. The Vols scored 18 points off of turnovers in the game and seemed to be much more effective when the game seems to ratchet up a level toward “out of control”. It’s absolutely critical that Michigan values the basketball and controls the pace of the game. Tennessee is 7-9 in games played at a 64 possession pace  or slower compared to 12-5 in faster games. Ken Pomeroy’s correlation numbers also show that Tennessee’s offense and defense improve as the tempo of the game increases.

Tennessee’s half court offense left quite a bit to be desired. The Vols had an awful shooting day, connecting on 4 of 19 three point attempts, and seemed content to sit around for long stretches. There wasn’t a lot of movement with a purpose, mostly a handful of seemingly meaningless passes followed by a drive and kick or drive and shoot. Tennessee got over a quarter of its scoring production from second chance opportunities.

My gut feeling is that Michigan should be able to hold Tennessee to a low shooting percentage, the only question is whether the Wolverines can hold onto the ball and box out guys like Brian Williams and Tobias Harris. Two terrific rebounders.

Tobias Harris was dominant in the first half of this game, scoring in a number of different ways. He scored off the pick and roll both as the screener and ball handler, hit a three, took the ball to the rack, and also scored with his back to the basket. At 6-foot-8 and 226 pounds, Harris can do a bit of everything at the four position. Harris had a good shooting game versus Florida – 10 of 17 (1-4 3pt) – but the key to defending him is forcing him to shoot jumpers. Here are his shooting numbers broken down into layups, two point jump shots, and three point shots:

As you can see, roughly half of his makes this season are on layups or dunks. Take away the easy baskets and Harris isn’t nearly as effective. Tobias is also a very good rebounder and has the ability to rebound the ball on defense and push the ball up the floor himself. Michigan has faced an array of talented power forwards this year of varying styles – Mbakwe, Watford, Shurna, Morris, Green, Basabe, Brooks, etc – but from what I saw in this game, Harris ranks near the top of this list if he’s on his A-game. He picked up a deep thigh bruise near the end of the first half and his production waned in the second half. He sat out during Monday’s practice but the issue shouldn’t have much influence this weekend.

Hopson is the best scorer on the Vol roster and while he’s never going to be the epitome of consistency, he’s still going to fill up the scoring column. Hopson started the game with an explosive move to the hoop before seeming to disappear for a while, mostly settling for perimeter jumpshots. He seemed to get things going in the second half when he began to attack the hoop again, driving, posting up and scoring on the interior. A 6-foot-7 200lb ball handler, he’s a tough match-up for Michigan. He’s extremely quick and can beat guys off the dribble but also play with his back to the basket. I think we could see Darius Morris on him early, as he might have to best combination of strength and quickness to defend him.

Hopson is Tennessee’s best perimeter shooter and makes 37.7% of his three point attempts, 5% better than the next best Vol. That said, his shot selection seemed far from perfect as he was content to fire up contested threes. He only assists his teammates on 11% of the possessions that he uses while turning it over on 19%.

It’s just one game but Williams was not impressive offensively. He finished with 6 points on 2 of 6 shooting and had several passes go off of his hands out of bounds. I’m not sure how he wasn’t credited with a single turnover in this game. Williams does a good job of using his massive frame (6-10, 272 lbs) to grab rebounds as he had 12 boards (8 def, 4 off). The offensive rebounding is the biggest concern for Michigan. I suspect you will see Morgan try to hold his box out on Williams as long as possible while having the guards try to clean up the mess.

Williams is obviously bigger than Jordan Morgan but Morgan is quicker and needs to use his quickness to his advantage. Morgan has battled Jared Sullinger who is similarly sized so he should be well prepared for dealing with a less skilled version. Michigan will also try to spread the floor and bring Williams into space where they can take advantage of his lack of foot speed.