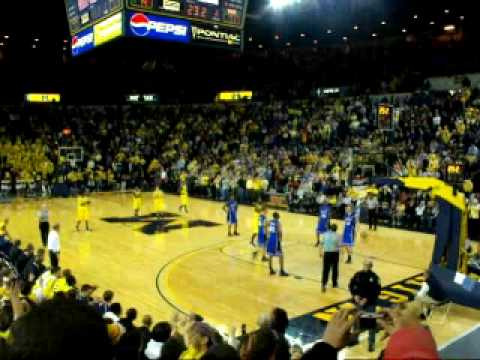 Michigan’s season has been defined by ups and downs, more specifically within a specific game. Good stretches of basketball followed by awful ones and vice versa. Blow out wins have been few and far between and most games have been decided by two or three possessions in the final minutes. Here in Charlotte, Michigan played its best stretch of basketball of the season, outscoring Tennessee by 26 points in the second half. Michigan battled its way through the first half, leading by four at the break before opening the game up with a 19-2 run to start the second half.

Tennessee was the more physically imposing team, bigger stronger and more athletic at almost every position, but Michigan made it very clear who was the better team. Michigan scored more points in the paint (24-8), points off turnovers (11-4), second chance points (5-0) and fast break points (6-2). Those statistical categories are great measures of “want to” and teams that win those battles will generally win more games than they lose. The Wolverines 30 point victory was the largest margin of victory in an 8-9 game ever and Michigan’s most emphatic win since opening the season with a 31 point victory over South Carolina Upstate.

Michigan’s offense was a bit out of the ordinary. The Wolverines scored 1.19 points per possession despite not making a single free throw. Hot shooting, 63% on twos and 35% on threes, and taking care of the ball, 17.5% turnover rate, have been constants of Michigan’s late season run. The wrinkle that the Wolverines threw into the mix today was great offensive rebounding. Michigan rebounded 38% of its missed shots, the most against any major conference team this season. The lack of turnovers and bountiful numbers of offensive boards resulted in Michigan attempted 21 more shots than Tennessee. Michigan’s offense was also extremely balanced with four double digit scorers and 20 total assists.

While the offense was great, Michigan’s defense was phenomenal. Michigan held Tennessee to just .7 points per possession and a borderline ridiculous .52 points per trip in the second half. Tennessee’s offense is far from great but this was probably Michigan’s best defensive performance of the season. The Vols didn’t shoot the ball well – 48% on twos and 17% on threes – and turned the ball over on 29% of their possessions. The Tennessee offense survived in the first half by making 10 of 12 free throws but Michigan allowed just four free throw attempts in the second half. By far the most impressive aspect of Michigan’s defensive performance was on the defensive glass. Tennessee rebounded just 20% of its missed shots, a season low.

Michigan went to a lot of zone looks for the final 30 minutes of game action and Tennessee just appeared bewildered. It was the 1-3-1 zone that provided Michigan with some energy – a Matt Vogrich steal and lay in – but Michigan opted to go with a packed in zone in the second, daring Tennessee to shoot. The Vols attempted 14 of their 23 field goals from three point range in the second half and made just two. That poor perimeter shooting coupled with the Wolverines drawing five charges, rattled Tennessee’s offense to a point beyond recovery.

Simply put, Michigan wanted this game more and it showed badly. The Wolverines won seemingly every rebound and 50-50 ball and despite being physically outmatched.  Next up is a second third round match-up with Duke. We all know what happened the last time these two teams squared off but this year’s Duke team is better than that one across the board. Oh, and they are the defending champions.