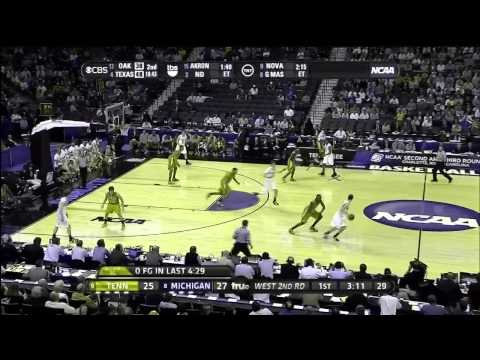 Against such an athletic team like Tennessee, Vogrich was pretty far down the list of expected impact players. As he’s done time and again this year, Matt made big plays after Tim Hardaway Jr. was sidelined with foul trouble. Vogrich hit a three today but that wasn’t where his biggest influence was offensively, he changed the game with his ability to catch Tennessee on backdoor cuts. Matt was 5 of 5 on the day and three of his makes, the ones featured in this video, came on backdoor cuts. The backdoor cut is the perfect counter against a defense that overpressures the ball and I think Matt is probably the best player on the Michigan roster at freeing himself on backdoor cuts.

2. Michigan goes 1-3-1 and Vogrich gets steal and layup

Vogrich is responsible for two of our key plays and this one gave Michigan the lead that it would never relinquish. The U-M shift to a 1-3-1 zone left Tennessee confused and tentative and this is just a terrible pass by Tobias Harris. Vogrich still does a great job getting in the passing lane and grabbing the ball but most impressive was his finish between two Tennessee defenders. 80% of the gym probably expected Harris to send Vogrich’s layup into press row but instead he got it up on the rim and let gravity take care of the rest as the ball circled the rim twice before falling in.

This is obviously more than a play, but it was the sequence which blew the game wide open. There are a couple stars here but this entire sequence starts with Darius Morris, despite not scoring a single point during the stretch. Morris controlled the game, pushed the ball, and found his teammates. Darius had four assists and played with the sort of confidence and swagger that makes the entire team better. Michigan scored on eight of the first 10 possessions and seven of the eight made field goals were assisted. It was nearly perfect offensive basketball which Tennessee countered with four turnovers, three missed 3-pointers and a dunk. The one other player who really deserves some credit during this stretch is Stu Douglass. Douglass attacked the basket and made some great passes, even accounting for Michigan’s lone unassisted hoop.

This one spans the entire game but these plays really changed the game. Similar to the backdoor cut on offense, drawing charges neutralized Tennessee’s dramatic advantage in length and athleticism. Drawing five charges in any game is impressive and this a complete team effort. Four different players took m a charge: Stu Douglass, Evan Smotrycz, Zack Novak (2) and Tim Hardaway Jr. That many different players getting in on the action not only means that Michigan players were willing to sacrifice their bodies, it means that the help defense was arriving on time and in the right spot.

There might not be anything particularly important about this play, it was a relatively meaningless dunk with four minutes left in the game that stretched the lead to 30 points, but man it was fun to watch. This play really symbolizes how Michigan played offensively in the second half. Free and loose, sharing the ball, confident and looking to make plays. Darius Morris has more than a little showtime in him but I don’t think he even expected Stu Douglass to rise up and dunk after he threw a beautiful behind the back pass. Tim Hardaway Jr.’s face in this picture tells the whole story (photo credit: Detroit News):