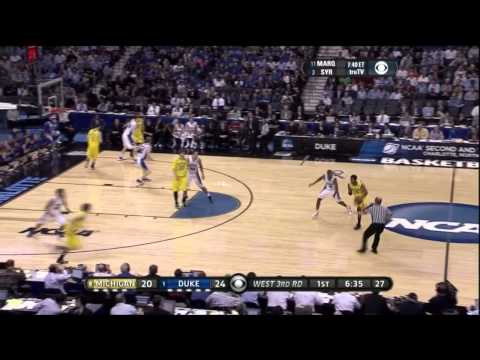 Evan Smotrycz explodes in the first half

Smotrycz hasn’t been consistent this year but he’s completely changed the complexion of several games. At the very least he’s displayed samplings of the offensive tools that make him such a promising prospect going forward. Evan had 11 first half points versus Duke and all of them were critical, allowing Michigan to hang around in the game despite playing without several starters. As you would expect, he hit a couple three pointers, but his most impressive move was a quick fake and drive past Miles Plumlee for a three point play. Evan’s potent combination of size and three point shooting ability mean that this pump fake is going to be there constantly. The key is being able to take the ball strong all the way to the hole or learn to shoot a pull up jumpshot. This was probably Evan’s strongest drive and finish all season long and he averaged 10 points per game over Michigan’s final five contests.

End of the first half

This was a crushing 4-point swing as Michigan had the ball with the opportunity to take the last shot of the half. With Darius Morris sidelined with two fouls, I was not expecting Michigan to end up with a great look at the hoop but they ended up with a great one. The resulting play ends up with Matt Vogrich shooting a wide open three after Douglass gets in the lane and kicks the ball to McLimans who makes a quick pass to Vogrich. Vogrich connected on 48% of his three point attempts in conference play, the best of any Wolverine, but missed this one. If the shot goes in, it’s a tie game heading into halftime. Instead McLimans puts both hands on Kyrie Irving while going after the offensive rebound and is called for a foul. Irving only made one of two free throws but this was still a deflating swing to end the half.

Tim Hardaway Jr. puts the team on his back

Hardaway taking over games has been a constant during the second half of the season. Michigan has given the ball to the freshman wing guard and told him to go make plays. He’s done a terrific job to say the least. The light appeared to go on during the game at Penn State and he hasn’t been the same since. This was no different as Hardaway manufactured a personal 7-0 run, trimming the Duke lead from 8-points to one in just under two minutes of game time. We’ve seen this so often down the stretch as Hardaway scores in a multitude of ways: taking the ball all the way to the hole, hitting a mid-range jump shot and then knocking down a triple. Remember that this is the same kid that was content to fire up corner threes for the first two months of the season. His improvement from November to March has been phenomenal and it’s quite clear that the sky is the limit for his development this summer.

Zack Novak chases a rebound through the Duke bench

Novak didn’t get this rebound, which would have given Michigan the ball with a minute left and trailing by one, but it wasn’t for the lack of trying. I’m not sure if he even had a chance to grab the ball as he went hurdling over the Duke bench, but Novak went after the ball with the sort of reckless abandon that very few college basketball players display. Novak knew how important this board was and he sent himself through Duke players, chairs and managers to try to make a play. Sure he would have rather caught it clean but his hustle after the loose ball says everything you need to know about #0. It was Novak’s leadership that catapulted this team back into contention this season and he epitomizes so much about what this team is about. Facing a physical mismatch in almost every game, Novak played more minutes than any other Michigan player this year and the 7th most minutes in the Big Ten. That’s one thing for a guard or shooter, but its much more impressive for a guy that defends players that are 6 or 7 inches taller and 50 pounds heavier for entire games.

There’s not much to say here. Sometimes the breaks don’t go your way. Darius Morris played this the way every point guard is taught in this situation. Push the ball down the floor and go for the tie. Morris breezed through the Duke defense and fired up a runner in the lane over Ryan Kelly. It hit back iron and Michigan’s season was over. Morris has excelled finishing the lane all season with a variety of crafty shots, converting a remarkable 53% of his two point attempts this season, but this one was just not to be. A cruel finish to a remarkable season. The other options – a bounce pass through multiple defenders to Tim Hardaway Jr. or turning around and throwing a backwards pass to Stu Douglass – might sound good in theory but they were near impossible passes, even for the point guard that set Michigan’s single season assist record this year.