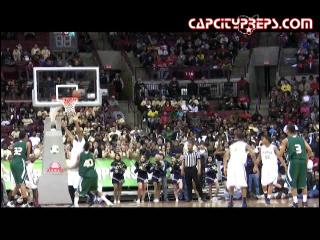 The match-ups with the most pre-game hype and excitement rarely seem to live up to expectations. This match-up between arguably the two best teams and players in the state was no exception. Northland won the game relatively easily but neither team played its best game on the big stage. Michigan commitment and Ohio Mr. Basketball, Trey Burke, finished with 15 points in the 67-59 Northland win. (Video: CapCityPreps)

Northland jumped out to an early lead and controlled the game but neither team ever really looked to be playing their best basketball. It was just one of those days for Trey Burke as he never really found his jump shot or looked comfortable on the court. He missed some looks early and picked up three fouls in the first half, further limiting his production.

Burke finished with 15 points on 4 of 17 shooting, five assists and four rebounds. Burke has shot the ball extremely well this year, including when I saw him play during Northland’s only loss versus St. Edward’s, but just never found a groove today. Garfield Heights face-guarded him off the ball early, which might have caused him to force things a bit, but he still got some clean looks that he just couldn’t hit.

As he struggled with his shot, he did still manage to help his team. He did a great job creating for others, handing out five assists, and pushing the ball in transition – although he missed a couple easy finishes. He found junior big man Devon Scott wide open for a couple dunks and found Jordan Potts for some clean three point looks. Defensively, he was solid with two steals and probably should have had a couple more. He’s very active defensively and has extremely quick hands. He was unable to guard Trey Lewis for most of the game because he picked up three fouls (two offensive) and Northland needed him on the court.

Trey Lewis had a tremendous game. The Penn State commitment was on fire from three point range and made 8 of 13 triples en route to 33 points. The player of the game for Northland was 6-foot-9 junior Devon Scott. Scott controlled the interior on both ends and finished with a double-double, 17 points and 10 rebounds. Scott has great length and blocked several Garfield Heights shot but he also showed good touch around the basket. Combo forward Tony Farmer is bigger and stronger than most sophomores and has great athleticism. His offensive game is still a work in progress but he finished with 11 points and 8 rebounds.

Northland will face Cincinnati LaSalle tonight at 8:30 for the State Championship.