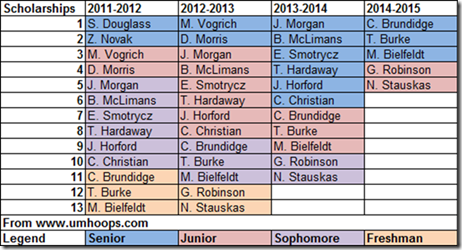 Nick Stauskas and Max Bielfeldt committed to Michigan this weekend

Last week was a busy week on the recruiting trail. 2011 big man Max Bielfeldt committed to Michigan on Friday and 2012 swing manNick Stauskas joined him on Saturday. It was also an eventful week for Michigan’s previous 2011 commitments. Both led their teams deep in their respective state tournaments but fell short of state championships. Carlton Brundidge and Southfield were knocked out in the semifinals by eventual champions Kalamazoo Central while Trey Burke was named Mr. Basketball on Wednesday before losing in the state finals to Cincinnati La Salle.

We posted more recruiting content than we normally do so here’s a recap:

More thoughts on Michigan’s future recruiting after the jump.

These commitments dramatically shift Michigan’s recruiting approach heading into AAU season. Strictly speaking, Michigan is out of scholarships for both the 2011 and 2012 classes. While this is true on paper, Darius Morris’s situations means that Michigan will likely have one more scholarship available in 2012. Morris very well could return next year, but he would be unable to “test the waters” next season and would likely plan on entering the draft after his junior season. Here’s the full scholarship table:

Here are a few assorted thoughts on recruiting going forward: