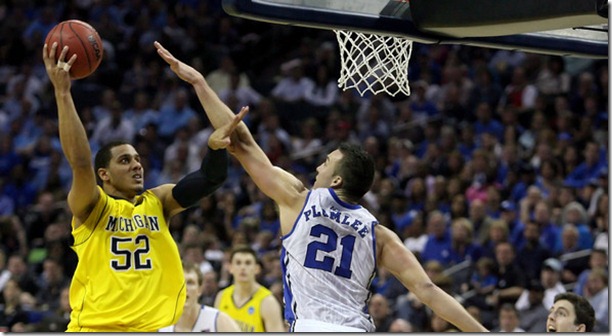 The first of many season review features.

Jordan Morgan committed to Michigan before Zack Novak, all the way back in December of 2007. Morgan was John Beilein’s third verbal commitment at Michigan but by the time he stepped onto the floor to begin his career, after Novak had played well over 200 minutes, he was all but forgotten. Morgan wasn’t highly rated in high school, despite occasional solid performances, and had two significant injuries during his redshirt freshman year.

The Jordan Morgan that we saw this year surpassed even the most optimistic preseason prognostications. To be brutally honest, I figured that the chances Morgan made it through the season uninjured were less than 50%. I certainly didn’t expect an extremely efficient big man that averaged 9 points and 5.4 rebounds per game while providing Michigan’s lone reliable low post threat. And this wasn’t his junior or senior season, Morgan accomplished all of this as a redshirt freshman.

Shining Moment: Morgan stepped to the free throw line in Iowa City with :12 seconds left and buried a pair of freebies to send the game to overtime. Morgan finished that game with 18 points (6-7 fg) and eight rebounds but those two free throws probably saved Michigan’s season. A patented “bad loss” likely sends Michigan hurdling toward the NIT, instead the Wolverines ended up in the second round of the NCAA tournament. You expect a guard that shoots 80% at the line to make those shots but for Morgan, a 56% free throw shooter, to hit both is even more impressive. (Second: 27 points on 11 of 13 shooting in a home win over Northwestern.)

Morgan surpassed even the most optimistic expectations for his freshman year. He quite obviously put in significant work on his game and in the weight room. He was efficient, solid on the glass, and played more physically and aggressively than most expected. The question now is where does he go from here? Darius Morris’ return is paramount for his development, as Morris facilitates a majority of his offensive production. It’s also important that Morgan continue to develop his offensive game and learn a couple basic post moves. No one expects him to turn into Jared Sullinger with an endless array of post moves, but becoming a threat on the block is important. At the very least, he should become more disciplined defensively and cut down on the silly fouls, allowing him to stay on the floor longer and become a more productive player.