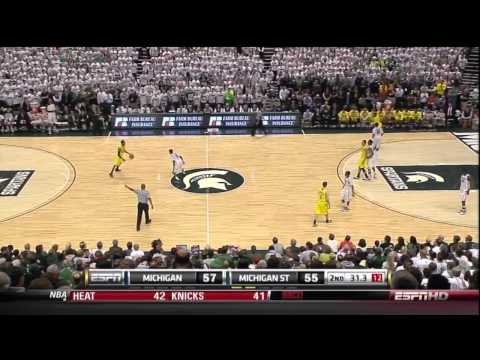 Stu Douglass seems to be a common scape goat among Michigan fans but, by the time his career is over, he’s on pace to be ranked among the top 10 Wolverines in minutes played and top 5 in three point field goals made. His junior year was his most productive statistical season to date, despite shifting between various roles. Douglass opened the season as the sixth man, providing a shooting boost off the bench. He played more minutes as the season progressed, eventually moving into the starting lineup and growing into Michigan’s primary perimeter defender as well.  Many Michigan players saw their roles change throughout the season but Douglass’ shift was the most dramatic.

Shining Moment: Stu’s two late baskets in East Lansing take the prize here. A pull-up jumper with four minutes to play and a deep three to ice the game with with 20 seconds left (bigger than his three versus UCLA?). They are worthy of video:

Stu’s transition from sixth man to starter didn’t necessarily go smoothly from an individual perspective. As Douglass began playing more minutes, his shooting efficiently declined steadily. Michigan also started winning games. The Wolverines were 7-4 in the games that Douglass started down the stretch and he saw his minutes increase significantly during Michigan’s late season run. Still, this graph is a bit sobering:

The graph also raises some interesting questions about Stu Douglass’ role going forward. What benefits Douglass? What benefits Michigan? How many minutes should he play next season? There is a large external component to this equation that relies on the other pieces in Michigan’s backcourt.

In an ideal world, Douglass would play somewhere around 25 minutes per game, all at the two position. That really seems like it would be the sweet spot, keeping him fresh enough to play a role offensively without taxing him by having him chase the opponents best player for 35 minutes  This isn’t really a knock on Douglass, playing fewer minutes feels like a move that would make him a significantly more efficient offensive player.

The sticking point is that, in order for Douglass to play fewer minutes, Michigan’s perimeter defense has to improve across the board. Darius Morris, Zack Novak, Trey Burke, Carlton Brundidge and Matt Vogrich are the players most likely to play minutes at the one and two next season. None of the upperclassmen are necessarily known as great perimeter defenders and it’s tough to expect any freshmen to be a lockdown defender.

Douglass’ 2010-11 season was up and down but his defensive performance during the last two months of the year was extremely impressive. He’s not a perfect player but he’s willfully accepted whatever role this team has required. Ideally he’ll finally be able to grow into a role that is catered toward his strengths and really allows him to blossom into an efficient offensive player as a senior.