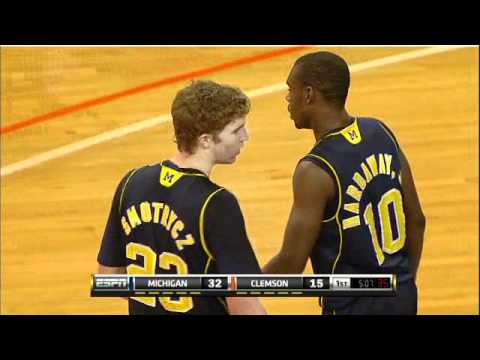 Before the season I mentioned that Evan Smotrycz might have one of the most difficult transitions of any of Michigan’s freshmen. That sounded odd because Evan was the top rated recruit in Michigan’s class, an RSCI consensus top 100 player, and appeared to be a perfect fit for John Beilein’s system.

One of the toughest positions to transition from the prep to college level is a perimeter oriented four man. 6-foot-9 players with skill show out on the AAU circuit, where the level of defensive intensity is a bit lacking, but to utilize all of those skills on the college level is a different fight. There are exceptions to this rule (see: Robbie Hummel) but for the most part it’s tough for these type of players to play an efficient brand of basketball as freshmen and Evan Smotrycz’s up and down year followed this rule. He displayed tantalizing flashes of his potential with nine double figure scoring games, tied for 4th on the U-M roster, including game changing performances versus Clemson and Michigan State. There were also a boatload of 2-9 and 3-11 type performances that demonstrated the freshman wasn’t quite there yet.

Shining Moment: 18 points (6-7 fg) and 6 rebounds at Clemson (YouTube highlights). In just his sixth college game, and first on the road, Smotrycz exploded for 18 points on seven shots. He was instrumental in allowing Michigan to climb out to a huge first half lead which really buoyed the season early, preventing a three game losing streak.

Runner-up: 14 points on 4 of 6 shooting versus Michigan State at home.

All eyes are on Evan Smotrycz. There’s been lots of talk about how much this team can improve during the off season but Smotrycz’s room for improvement and potential impact should be number one on any list. He has the tools to become a difference maker at the position that’s been Michigan’s most glaring weakness for the past three seasons.

That’s not to say that Evan doesn’t have flaws – he certainly does, and they might never be truly eliminated. He’s not the best athlete, a problem which is magnified by his below average wingspan. His limited athleticism might prevent him from becoming a great defender and rebounder, but that doesn’t mean he can’t become much better with an offseason in the weight room. I’m confident that Smotrycz will make significant improvement on the offensive end next season. He should push his three point shooting percentage up, flirting around 40%, and continue to diversify his offensive game inside the arc. His value to next year’s team depends on how much he can improve defensively and on the glass, allowing him to stay on the court for longer stretches.

Smotrycz improving by a significant margin would present John Beilein and his staff with a number of “good problems” to solve. It would mean that Zack Novak doesn’t play as many minutes at the four. That would create a bit of a log jam in the backcourt with Morris, Douglass, Novak, Burke, Brundidge and Vogrich but that’s another good problem to deal with. For now, the ball is in Evan’s court. His freshman year was acceptable, and probably equal to reasonable expectations, but he has the potential to have a breakout season. If Michigan is going to become a significantly better team next year, Smotrycz’s 2012 report card will be calling him out as the team’s most improved player.