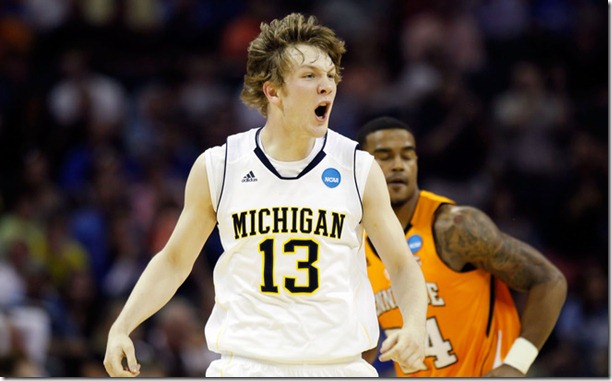 In his first college basketball game, against Division II Northern Michigan, Matt Vogrich hit five three point shots, he was also crossed over several times and looked completely overmatched defensively. The latter turned out to be a much bigger factor in Michigan’s 2009-10 season. Vogrich seldom played after that first game, severely limited by his lack of quickness defensively, and made just six more three point shots over the next 31 games of his freshmen season.

There were serious concerns over whether Vogrich could play at this level, even as a shooter off the bench. In his sophomore season, Vogrich tripled his playing time and improved his shooting numbers, seeming to provide Michigan with an opportune boost off of the bench in several key moments.

Shining Moment: 11 points (5-5 fg), three rebounds and one steal in NCAA Tournament win over Tennessee. Vogrich spearheaded a first half run that earned Michigan a small halftime lead before the Wolverines were able to break the game open in the second half. Video.

Vogrich proved that he can come off the bench and hit open threes. He’s far from a perfect player, and he’s probably only capable of doing half of the things that Tim Hardaway Jr. can do at the same position, but he fills a specific niche on the offensive end. Michigan is able to run a variety of sets for him when he’s in the game and if he ends up with an open look, there’s a good chance it’s going in.

With two freshmen guards arriving in Ann Arbor this summer, there has been heated debate over Vogrich’s role on next year’s team. There is certainly a log-jam developing in the backcourt – Morris, Burke, Douglass, Brundidge, Novak, Vogrich and Hardaway all play the 1-3 positions – but Vogrich has some distinguishing traits. First off, he’s able to play two positions, the two and the three, while most of the freshmen will likely be groomed into specific roles. That versatility coupled with his shooting ability should guarantee that he finds some minutes somewhere. It’d be crazy to expect Vogrich to play more minutes next season, but I don’t see why he can’y play a similar 10-15 minutes per game off of the bench.