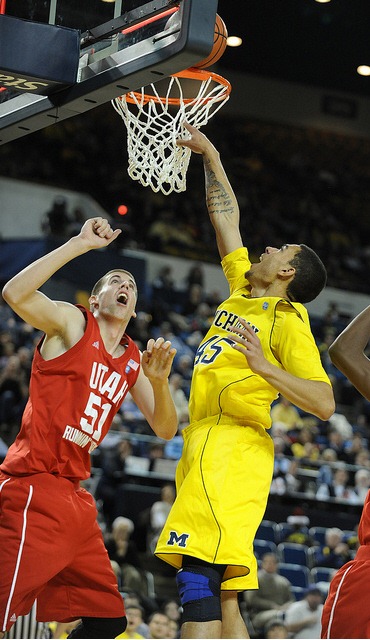 Jon Horford, Blake McLimans and Colton Christian all played at least a handful of important minutes at some point this season but never saw consistent playing time. The trio played fewer than 200 minutes on the year and didn’t make it off the bench in six or more games. Due to the limited sample size available to judge these players, we’ll keep it short and combine them all into one “report card”.

Of the players outside of Michigan’s core rotation, Jon Horford showed the most promise. It was also clear that the game was moving just a bit too fast for him to make an impact as a freshman and he was also slowed by a knee injury late in the season. Both of these factors, as well as a general lack of strength, limited Horford’s playing time but didn’t prevent him from demonstrating his ability for stretches. The one thing we know for certain is that Horford can rebound the ball. Horford’s rebounding percentage numbers were very impressive – rebounding a quarter of opponents’ missed shots while on the floor – and it will be interesting to see if they hold up with more playing time.

He didn’t do a whole lot offensively but he did convert a very solid 21 of 38 (55%) of his two point shots. He had confidence to fire away threes, especially early in the season, but made just 1 of 8 long range attempts. Most of his scoring came from strong point guard play and offensive rebounds. Horford does have a few back to the basket moves but is still a bit too methodical with his movement on the block.

When you look at Horford, the most encouraging thing is that most of his problems this year are fixable. He can get stronger and the game will almost certainly slow down over the course of his career. A long summer in the weight room along with some 1-on-1 versus his older brother should do wonders for his game. He struggled with defensive rotations at times this season, and that’s another problem that should be alleviated by experience.

The best case scenario is that Horford improves by leaps and bounds and is ready to play 15 minutes per game backing up Jordan Morgan at the five position. Horford might have more natural tools than any other big man on Michigan’s roster and, after watching Morgan’s rapid improvement, it’s tough not to be excited about his future.

McLimans was supposed to be Michigan’s perimeter shooting five man that would stretch opposing defenses. Unfortunately that never quite happened. McLimans played that role, attempting 19 three point shots on the season, but made just one three pointer all season (5.3%). If McLimans was able to hit three point shots more effectively, it would go a long ways toward masking some of his other flaws such as his team low defensive rebounding percentage. Similar to Horford, the game seemed to move a little too quickly for him and he constantly looked rushed, especially on the offensive end.Three point shooting is the key for McLimans to play an important role on this team going forward. If he’s not able to make threes, I’m just not sure what else he can bring to the table.

Big men have mysterious development cycles so it will be interesting to see what sort of improvement Blake makes before his sophomore season.

Christian played some key minutes in several games for Michigan. The jumpshot he hit against Michigan State was clearly the play of his season but he seemed to make several other key plays this season (the tap out in Minneapolis stands out as well) despite rarely playing more than 2 or 3 minutes per game. He improved significantly as a defender over the course of the season and also demonstrated very good rebounding ability. By the end of the year he seemed to be a good enough defender and rebounder that his lack of offensive abilities were manageable for short stints.

Still, his offensive numbers were anemic and he only attempted a field goal on 6.5% of Michigan’s possessions while  on the floor. He made just 2 of 11 field goals in the 127 minutes that he played on the season. Christian’s offensive game was so limited as a freshman that expecting a huge leap is unfair.

There is certainly room for a defensive stopper at the combo forward on this roster, but to successfully fill that role Christian needs to improve by leaps and bounds on the offensive end. He needs to be comfortable shooting an 18-foot jump shot, show the ability to make backdoor cuts and prove that he’s a threat with the ball in his hands.  He doesn’t need to be a great offensive player, but if he continues to improve he should see situational minutes again next season.