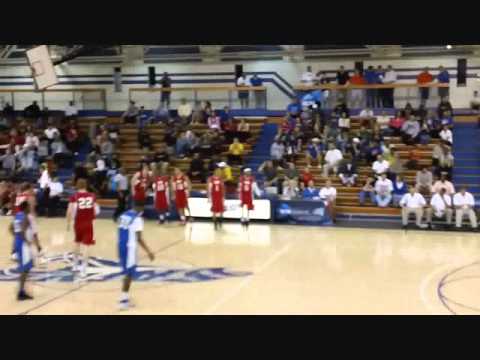 AAU kicked into full gear on the national stage with the Boo Williams Invitational (or EYBL Session 1) but there were also some strong regional tournaments as well. The Michigan Mustangs hosted the Motown Showdown and IndyBall.com hosted a tournament in Indianapolis. Before the AAU talk, here are a couple other tidbits from the weekend:

There was also a short open contact period that allowed coaches to hit the road. John Beilein made the trip out east to watch 2012 big man Mitch McGary (pictured). McGary played very well at an AAU tournament in Milwaukee a week ago and plays alongside Michigan commitment Glenn Robinson III. McGary still has a long list of high profile schools recruiting him but it’s clear that Michigan continues to try to works its way into the mix.

Trey Burke spearheaded a Team Ohio comeback as they knocked off Kentucky in an All-Star event over the weekend. Video highlights here.

The Michigan Mustangs, Team Detroit, REACH Legends and ACB Bank Hoops were some of the headlining local teams at the Motown Showdown over the weekend. That meant plenty of young in-state talent was on display.

The Michigan Mustangs 17U team featuring Denzel Valentine, Chris Harrison-Docks and Marquis Mondy won the 17U Gold Division over Team Detroit. Most reports out of Detroit tabbed Valentine as the most impressive player at the tournament. Sean Sheldon also played very well at the 17U level, leading ACB/Bank Hoops to an upset victory of the Mustangs early in the tournament despite MSU commitment Matt Costello sitting out with an injury for Bank Hoops.

The Team Detroit 16U team – featuring Monte Morris, Denzel Watts and Leo Edwards – won the 17U silver bracket while playing up. Morris was phenomenal by all accounts that we’ve received, continuing to make a strong case as the number 1 point guard in the state, and even hit the game winning three in the finals. As reported by TJ Kelley, Morris is being recruited by Michigan State, Michigan, UM, Syracuse, Iowa, Xavier and Dayton. Edwards appeared much improved while Watts scored 16 pts in the quarterfinals, 25 in the semis and 19 in the finals.

The Michigan Mustangs 16U team featuring Derrick Walton and Steven Haney lost in the 16U semi-finals to the REACH Legends. While Walton was slowed by injury, we received this report in the inbox:

There isn’t much to say about Walton that hasn’t been said before, he is everything you want out of a point guard. Controls the game by setting up teammates, takes it fearlessly to the hole and can create his own shot when needed. I was only able to watch him one game because the 2nd time he only played about 5 minutes before he was on the bench icing his knee the rest of the game. While this Mustang team is very talented you can tell they are a different team when Walton isn’t the man in charge. He needs to get stronger and work harder on D all the time.

Another more uncovered 2013 wing prospect that played very well was Vince Hunter of the Detroit Stars. Here’s another report from the same e-mailer above:

Hunter impressed me during high school season and even impressed me more with the few games I watched him play Sunday. He hit a growth spurt during the season and grew a few inches. Hunter is a very strong and superior athlete that works hard on the glass and runs the floor very well as he normally finishes it with a dunk. He showed better handles than when I watched him during the season. If he works to improve his jump shot  while continuing to grow he might just end up being the best player in the state.

The primary Michigan targets playing in Indiana were 2013 wings Zak Irvin and VJ Beachem. Our friend Joe Eberhardt was able to check out both players and provided this scouting report:

The sharpshooting sophomore wing had a productive day for his Eric Gordon All-Stars 16u team. Beachem showed the ability to finish above the rim in traffic, displaying impressive athleticism and bounce. Also shooting the ball well, Beachem knocked down mid-range and perimeter jumpers throughout the day. He looks most comfortable in catch and shoot situations, able to use his quick release to fill it up from deep. Beachem was consistent, scoring 15 and 20 points in his two Saturday games. Physically, Beachem appears to have grown a bit in the past year, measuring in at 6’7 and possessing great length. His athleticism and length also make him a formidable rebounder, able to crash the glass and convert second chance opportunities on offense. Adding strength would greatly benefit Beachem, making him a more dangerous and productive player.

Irvin was quiet as a scorer, but still impressed today. The 6’5 wing was extremely effective as penetrator and secondary distributor for his Eric Gordon All-Stars team. Irvin has improved his ability to drive and get to the rim, opening up the passing game for a player with a great feel for the game. Irvin’s newfound tendency to drive and distribute makes him that much more dangerous, adding to his overall skill set. The sophomore was also active on defense, moving well and getting after it on the perimeter with is quickness and length.

Gary Harris was also in attendance, playing with the D3 Pride, you can find highlights and a video interview over at Inside the Hall. Harris mentions that he could trim his list soon and that the only new school recruiting him is Kentucky (no offer).

6-foot-7 2012 wing Jodan Price led The Family with a number of impressive shooting performances, hitting five treys in one game. Price earned some love from ScoutHoops.com ($) and also from Rivals’ Jerry Meyer:

At 6-foot-6, Price opened some eyes with his sweet shooting stroke from the wing. That skill alone makes him an intriguing prospect.

Jaylon Tate, a 2014 point guard from Chicago, is receiving some Michigan interest ($).  Sim Bhullar played well and was featured in this article that does not mention Michigan. EC Matthews, “an absolute attack mode player who loves to get to the rim”, and James Young, ”made shots and showed two very nice athletic moves off the bounce to finish”, both received praise from Scout.com’s Brian Snow ($). Matthews was one of the top performers at Michigan’s camp last summer.