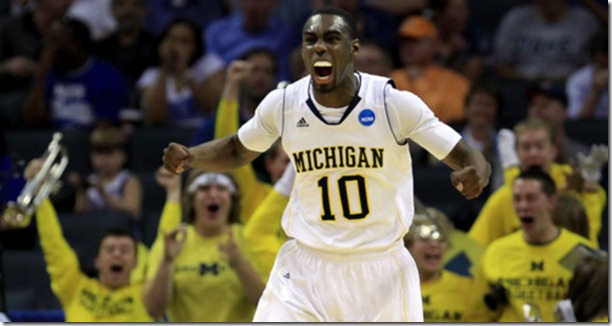 Tim Hardaway Jr. had missed his first five shots from the field and Michigan was down nine points with under eight minutes to play. The stage was as about as small as can be for a Big Ten game, a relatively innocuous Sunday noon tip off at Penn State in front of a mere 8300 fans. Regardless of the setting, the next eight minutes transformed Tim Hardaway Jr. into a star. Hardaway went on to score 13, and assist five more, of Michigan’s final 26 points as the Wolverines stormed back to escape Happy Valley with a three point win.

Hardaway never looked back. Up until that game, the freshman wing guard averaged 11.5 points per game with a 46% effective field goal percentage. Respectable numbers but nothing compared to the 17.5 points game, and 70% eFG%, that he averaged over Michigan’s final 12 games. Suddenly Michigan was instinctively running its offense through the freshman and, time and again, he was producing. He wasn’t just making shots, he was making the most important shots. He was usually the Michigan player that would spearhead one of the Wolverines many herculean second half comebacks over the final month of the season. And he was no longer just a jump-shooter, he was creating offense for himself and others, picking up 26 of his 59 assists in that final 12 game span. A star was born before our eyes.

The most impressive aspect of Tim Hardaway Jr.’s season was that we were able to see him progress so far as a player in just one year. This wasn’t offseason improvement, Hardaway became a different player from game 1 to game 12 and game 12 to game 25. He seemed to improve every time out. And he didn’t improve by using more possessions, he simply used them more efficiently. He took better shots with more confidence and transformed from jumpshooter to playmaker.

The three position in John Beilein’s offense is generally the primary shot taker and, after one season, Hardaway appears to be the perfect fit for that position. He is comfortable shooting the three, running the pick and roll and coming off of curls. The fact that he was so successful over the final month of the season leaves Michigan fans dreaming of what he can do next year.

It’s impossible to expect Hardaway to shoot as well as he did in the final month of the 2011 season. But as he improves his ball handling, passing and defensive abilities he will be able to influence the game in far more ways than he did as a freshman.

A summer in the gym with his teammates, father and USA-U19 hopefuls should do him nothing but good. The fact that Hardaway was able to improve so much during the season makes it almost impossible to expect anything but more improvement during the offseason. He has the tools, the work ethic and the opportunity. All we can do is sit back and wait to see what Hardaway adds to his game during the offseason.