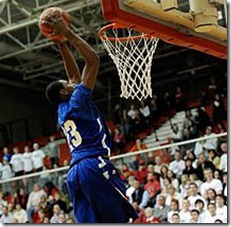 The original plan was to head to Pittsburgh to get a long look at Michigan’s 2012 commitments Glenn Robinson III and Nick Stauskas. Stauskas was nursing an injury and took the weekend off so that meant an even longer look at Robinson.

Robinson and Mitch McGary’s SYF Players team suffered a surprising defeat in pool play but rebounded to win the 17U silver championship on Sunday.

We have scouting notes on Robinson and several other prospects after the jump and make sure to stay tuned for video from the event as well.

Strengths: Robinson was an effective slashing scorer for the SYF Players. He attacked the basket with the ball in his hands and was almost always able to finish or get to the free throw line. He was also very aggressive on the glass on both ends and rebounded outside of his area on both ends. He had several impressive finishes in transition and demonstrated great athleticism and quickness.

Areas for Improvement: Glenn still needs to get stronger, as he had the ball knocked out of his hands several times in the paint, and continue to improve his handle. He served as SYF’s primary ball handler a couple times but was obviously much more comfortable on the wings. His perimeter shooting appeared to be streaky as he started the weekend cold but seemed to improve as the weekend wore on.

Bottom line: Robinson still appears to be growing into his body. He’s easily 6-foot-6 and appears to be just scratching the potential of what he’s able to do. He has so many tools but I expect Robinson to continue to gain strength, aggressiveness and confidence offensively as his game continues to blossom over the next year before he sets foot in Ann Arbor.

McGary’s uncanny combination of size, strength, athleticism and coordination is extremely impressive because it allows him to do so much on the court. He loves to rebound the ball and push it up the court himself. He attacks the basket with a nice face-up game, although it’d be nice to see him play more with his back to the basket.

His decision making needs work as he often tries to do far too much before turning the ball over.He also tends to float to the perimeter a bit too much and loves to settle for jump shots despite having the tools to get a much better look at the basket. Overall, McGary was extremely impressive and he is on the verge of blowing up if he hasn’t already. The lefty’s flaws are correctable and easily outweighed by his size and talent.

High major schools are flocking to see him play, as Arizona, UConn, Duke, Florida State, Maryland, Syracuse and Texas are all expected to watch him workout this week. Rivals’ Jerry Meyer notes that McGary might be the “most intrigued” by Arizona, Florida, Maryland and Texas. John Beilein made the trip to watch McGary last week but at this point it’s pretty clear that McGary’s recruitment will explode over the next several weeks and months.

Appearing every bit (if not more) of his advertised size, Bhullar is massive. He blocks seemingly any shot around the basket and also possesses surprising touch when he gets the ball on the block. While he’s improved his conditioning, it’s still not where it needs to be at the next level. His quickness seems to hurt him the most on the glass where he just isn’t quick enough to be the sort of rebounder that you would hope from a man that big. He also needs to be more assertive on the offensive end, as he didn’t seem to get nearly enough touches.

Lee played a tremendous game to open gold bracket play for Dorian’s Pride despite suffering a 2-point loss. He attacked the basket relentlessly and constantly pushed the ball up the court. He seemed very comfortable playing on the ball and scored almost all of his points in the paint whether in transition, with the pull up jumper or by taking the ball all the way to the hole. He did miss a couple close looks after over adjusting in the air and also has the bad habit of leaving his feet before making a pass, but it was an extremely impressive performance for Lee as he seemed to carry Dorian’s Pride.

Wilson is known as a shooter and, after getting off to a cold start, he did that fairly well. He made three triples in the game I saw but just wasn’t able to do much more. He tried slashing to the basket several times but couldn’t seem to convert. That’s the right mindset and as Wilson continues to improve in that regard he could be an intriguing prospect.

The plan was to see Zak Irvin and VJ Beachem with the Eric Gordon All-Stars 16-U team but I made the grave mistake of assuming they’d reach the quarterfinals. After breezing through their pool-play games, they were knocked out in the 2nd round of bracket play. We’ll have to catch them at another tournament or you can look back at our videos from last week.