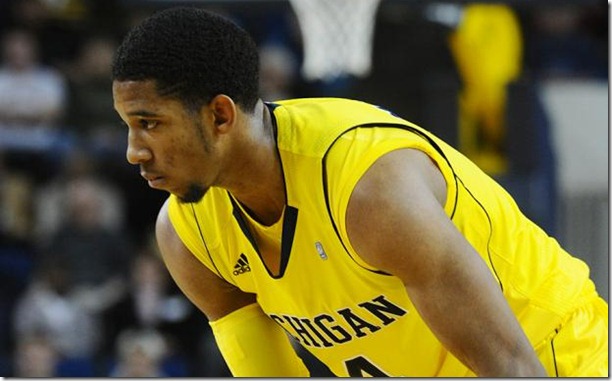 When Darius Morris committed to Michigan he was arguably the highest rated commitment that John Beilein had landed during his coaching career. Beilein spent a significant amount of time recruiting the California native after prioritizing him early in the process. In many ways, Morris’s commitment helped alleviate concerns regarding Beilein’s recruiting, as he was clearly a different level of prospect than Zack Novak, Stu Douglass, Ben Cronin and Jordan Morgan. Morris’s commitment was a recruiting statement and fans expected an immediate impact.

After being touted as the future of the program before setting foot in Ann Arbor, Morris’s freshman season was a disappointment. He turned the ball over, shot poorly from the perimeter and looked nothing like a top 100 player. He never looked comfortable on either end of the court and was the least efficient offensive player that played major minutes in a season that went horribly wrong from the get-go.

The Darius Morris that we saw this season was a completely different player. Whether it was the workouts with John Wall back home in California, long hours working on his jump shot, or just feeling more comfortable in his role, Morris was easily one of the top five most improved players in the country. He seized control of the Michigan offense. Not just by taking and making big shots but also setting up his teammates. From game 1 to game 35, this was Darius Morris’s show.

You want a point guard to make his teammates better and that’s exactly what Morris did this season. He was extremely proficient in the pick-and-roll game, demonstrating great chemistry with his roommate Jordan Morgan, but also managed to find his shooters in prime position. It’s almost impossible to ignore the fact that all of Michigan’s returning three point shooters were significantly more efficient this season compared to last.

Sure there are areas where Morris can improve but as it stands now he’s a terrific college player. It’s scary to think about how good he could be if he’s able to add a consistent three point shot to his repertoire. Over the next 18 days Morris will make very important decisions while deciding whether he wants to enter the NBA draft and then if he wants to withdraw his name or forgo his final two seasons of eligibility. If Morris enters the draft, hopefully it’s because he is confident he’ll be a first round pick. If he returns to school, it’s tough to doubt his offseason work ethic. He improved almost every aspect of his game between his freshman and sophomore seasons and, while similar sized jumps are unrealistic, more improvement should be expected.