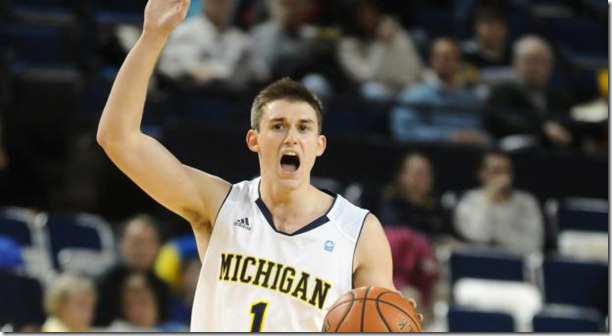 Don’t hesitate to tweet or e-mail any questions that you want to see answered in future editions of the mailbag.

Blazefire84: @umhoops With the renovations to Crisler, does anyone know if the student section will be moved/enlarged, or will Maize Rage be the same?

From what I understand, the Maize Rage bleachers will be moved to the other side of the arena when the new renovations are complete. They’ve already been removed, as you can see from the picture above. This is to make room for the new tunnel, which will be located on that side of the arena. it’s worth noting that everything else will be flipped to the other side of the arena as well – TV cameras, team benches, etc. So you most likely won’t be able to tell that the student section has moved on television. The basketball team has posted many more construction pictures on the Facebook page.

Early reports were that the Maize Rage has pre-sold more tickets than it sold last season and that’s before freshmen (who usually purchase the highest proportion of tickets relative to class size) have made any purchases. The actual section will stay the same size but I assume that there will be a similar wrap around effect with more student seating next to the band. lancegordon: @umhoops Which 2011 freshman from do you see taking the biggest step fwd next year? (I say @evanMsmotrycz)

That’s probably a fair guess, and Evan Smotrycz will have every opportunity to display his improvement. Smotrycz provided Michigan with a scoring boost in several games last season but unleashing him as a consistent scorer at the four position would make Michigan significantly tougher to guard. He’s shown that he can shoot the three and if he’s able to attack the basket a bit better next season, or learn to knock down the mid-range jump shot, he can be extremely effective in the Michigan offense.

HolyGhostDJ: @umhoops what part of Hardaway’s game needs improvement for him to take the next step?

His handle and aggressiveness taking the ball to the hoop. This was the primary difference between the Hardaway that we saw for the first 20 games and the Hardaway that took over during the final 15 games. Hardaway needs to play with that attacking mentality and continue to improve on his two point shooting percentage – 48% last year – to become a more well rounded player.

That’s a good question. Make or break is too harsh of a description, especially before the schedule is released, but the tournament will certainly be important. The field is loaded – Duke, Kansas, Memphis, Georgetown, Tennessee, UCLA and Chaminade – and a couple of early season losses can be extremely deflating. (A couple of wins can have an equally as empowering effect on a team.)

Two years ago we saw the season spiral away in late November as Michigan went 1-2 at the Old Spice Classic before losing at home to Boston College in the Big Ten-ACC Challenge. That season illuminated just how slippery the slope becomes when you drop a couple of early games. Michigan did a much better job at rebounding from early tournament disappointment this season. The Wolverines went 0-2 in Atlantic City but bounced back and won on the road at Clemson.

Early season losses tend to infuse doubts in a team’s psyche and it’s always better to get off to a hot start in November. Those marquee early season wins also serve as a trump card come March whether it’s for tournament selection or seeding. It’s tough to really say how important those games are until we see the schedule. Michigan should have a very difficult road game shortly after with the Big Ten-ACC Challenge and have been reportedly looking to add another high profile home-and-home to the schedule.

JTPaulisin22: @umhoops Around what time are the schedules usually released?

Big Ten single plays were rumored to be slated to be released in April but time is running out. The full schedule isn’t typically finalized until August but more information should leak out over the coming days and weeks.

What we do know thus far is listed here and we’ll continue to update that page. The Big Ten schedule won’t have any dependence on the football divisions and Michigan will play four teams once, and we know that Michigan will play Purdue and Illinois twice.

JTW313: @umhoops If Darius leaves does Burke become the number one option at point or do we resort back to Stu like 09-10?

This depends on one person: Trey Burke. Darius Morris received every opportunity to make an impact as a freshman, starting his first nine games, but was eventually relegated to the bench after struggling early. I think Burke will be awarded a similar opportunity if he proves himself this summer and fall. Of course, as I noted during Morris’s freshman season, true freshman point guards generally struggle throughout their freshman years.

Beyond the concerns of Burke playing the point as a freshman, the greater concerns surrounding Morris’s departure are how his loss effects other players on the roster. Expecting Burke to run the pick and roll as efficiently as Morris is probably wishful thinking, something that will limit Morgan’s production. History also says that the more minutes Douglass plays on the ball, the worse his shooting numbers will be.

Carlton Brundidge can play, despite being often forgotten, and he could complement Stu Douglass quite well. Brundidge can be effective attacking the basket and running the screen and roll which would allow Stu to float more to his shooting role on the offense. Morris leaving would be a frustrating blow, but it’s convenient to have two guard recruits headed for Ann Arbor that are two of the three or four highest rated signees since Beilein arrived at Michigan.

FreshlySnipesJr: @umhoops what do you think of UM’s bball recruiting under Beilein so far? Will we be able to compete for top in state kids soon?

Beilein’s recruiting continues to trend upwards. It seems that each class is better than the class before it and the general talent level on the roster continues to improve.

When Beilein arrived in Ann Arbor he was recruiting guys without scholarship offers. The recruiting board in the spring of 2008 looked something like Zack Novak, Kyle Cassity (SLU), Justin Watts (UNC) and Kyle Kuric (Louisville). Michigan fans were giddy when Justin Watts was scheduled to make a weekend visit to Ann Arbor. Zack Novak committed on Friday and Watts’s visit was mysteriously cancelled. I’m not sure that Michigan’s 2008 class – Zack Novak, Stu Douglass, and Ben Cronin – had one high major scholarship offer between them.

Darius Morris, Matt Vogrich, Evan Smotrycz and Tim Hardaway Jr. were all steps in the right direction. Carlton Brundidge and Trey Burke appear to be similar, probably bigger steps, in the same direction. Add in Glenn Robinson III and Nick Stauskas and you can start to see the pieces really fitting together.

Michigan landed one of the top instate kids in the class of 2011, Carlton Brundidge, but Tom Izzo cleaned up in 2012 by grabbing Matt Costello and Denzel Valentine. I think the true test for instate recruiting will be in the class of 2013. Michigan appears to be in a very good position for several instate prospects in that class and at this point it’s tough to cherry pick who the very top kids are.

Things will start to heat up this June, when scholarship offers are handed out, and it will be interesting to see what prospects pick up Michigan and Michigan State offers and where they choose to commit.

RyanParrill: @umhoops How much will we see Horford and Morgan playing at the same time? #mailbagquestion

We won’t. I don’t think either of them have the perimeter skills to play the four position on offense, and that’s not necessarily a bad thing. Michigan didn’t really have two consistent options at the five position last season. Jordan Morgan was phenomenal but Jon Horford or Blake McLimans were never able to provide consistent back-up minutes. Evan Smotrycz emerged as the best back-up five, a situation that is probably suboptimal for both Michigan and Evan.

In a perfect world, Horford improves enough this offseason to be that productive backup five man. He can come in the game when Jordan Morgan picks up early fouls and not miss a beat. A 25-15 split of minutes at the five position would probably be healthy for both.

The keys for Horford are becoming more comfortable on offense but also, more importantly, learning to play and react faster on the defensive end. Improved performance in those areas, combined with the stellar rebounding ability we saw last season, would go a long way toward making Horford into a consistent contributor.