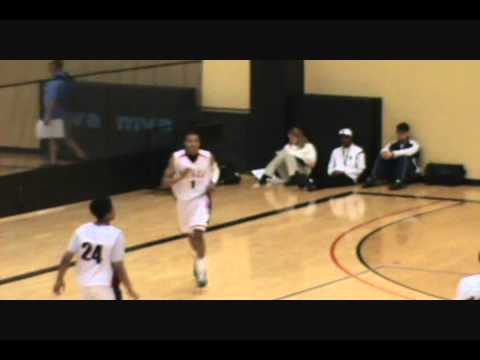 A collection of the latest news, video and scouting updates on Michigan recruiting targets.

Robinson’s SYF Players teammate, Mitch McGary, might be grabbing more national headlines but Robinson continues to play well on the spring AAU circuit in his own right.

That’s the case with 6-foot-5 wing Glenn Robinson III. The Michigan pledge has always shown offensive flashes, but now he’s broadened out and strengthened through the shoulders. As a result, he’s more aggressive going toward the bucket and can play more of an attacking offensive game.

Scout.com echoed similar sentiments ($) and it’s generally a good sign if both national sites are routinely pointing out your strong play on the circuit. NY2LASports also tweeted about Robinson’s strong performance against Dream Vision on Sunday.

There are numerous 2013 prospects that are garnering Michigan interest this spring. It’s clear that Michigan is casting a wide net leading up to June 15th, when the first wave of 2013 offers will be extended.

It seems that new names and prospects emerge after every mid-western AAU tournament this spring. Over the next several weeks we’ll work on putting together 2013 positional breakdowns on the guards, wings and bigs but for now make sure to check out our list of 2013 prospects which we’ll be updating frequently. Here are a few notes on a couple of those prospects that shined this weekend.

First off is Malcolm Hill Jr., a talented wing guard out of Illinois. Hill received praise from Scout.com ($) and Rivals.com, quoted here:

A class of 2013 wing, Hill has been earning much acclaim the past few weeks. A legit 6-foot-4, Hill has the look of a potential high major prospect and lived up to his billing. Physical and aggressive, he attacks quickly off the dribble and is particularly explosive going to his left. Hill finishes around the rim, can knock down three-pointers and is a good mid-range playmaker.

Our friend Joe Eberhardt, of IndyHSHoops.com, was at the Eric Gordon All-Stars Classic in Merrillville over the weekend. We’ll have more from Eberhardt during the week but he did pass along that 2013 Indiana point guard Zavier Turner is considering Michigan. Turner is a shorter guard but extremely quick, here are some more highlights from his high school season.

Eberhardt also had the opportunity to watch another 2013 prospect that’s been on the radar for quite some time, Zak Irvin. Irvin is an extremely long wing guard that loves to shoot the ball and plays on the loaded Eric Gordon All-Stars 16U team. We’ll have more on Irvin and Turner this week.

Michigan Prep Stars put together these highlights of Sherron Dorsey-Walker this spring: