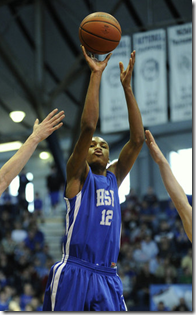 The Spiece Run ‘n Slam Classic is one of the premiere midwestern spring AAU events and this year’s tournament is no exception. There are plenty U-M recruiting targets participating in the event and we’ll have coverage throughout the weekend and beyond.

I spent Friday night watching the Eric Gordon All-Stars 16U team, featuring 2013 wings Zak Irvin and VJ Beachem, as well as the Illinois Wolves 16U team with 2013 point guard Jalen James. Here are a few notes from the first night of action:

We’ll have much more from the Spiece Run ‘n Slam Classic over the coming days.