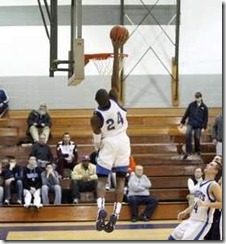 Numerous Michigan recruiting targets played at the Spiece Fieldhouse on Saturday and we were able to get a long look at quite a few. In this report we take a look at Zak Irvin, VJ Beachem, Demetrius Jackson, Sherron Dorsey-Walker, EC Matthews, Mark Donnal, Jalen James, Derrick Walton, and Steve Haney. Stay tuned over the coming days for extensive video and more notes and quotes.

Demetrius Jackson – 2013 Guard – MBA Select There’s a lot to like about Demetrius Jackson. Jackson is one of the more explosive U-M point guard targets that we’ve seen this spring. He has a great first step and gets into the lane easily where he can finish or, more impressively, dish to the open man. He had tremendous vision and consistently created for others off the bounce. He shot the ball extremely well against the Mac Irvin Fire in bracket play, making four or five triples, and nearly helped his team to the upset win . Jackson has the rep of a streaky shooter, but if he shoots like he did tonight he’s hard to stop.

Zak Irvin – 2013 Wing – Eric Gordon All-Stars Irvin got off to a slow start on Friday night but played very well on Saturday. He scored the ball consistently and is extremely smooth with the basketball. When Zak catches the ball with the mindset that he’s going to make something happen, he usually does. He has a consistent three point shot and was very comfortable moving without the basketball and shooting the ball off the catch. As he develops more strength, he will be able to take the ball stronger to the hoop.

VJ Beachem – 2013 Wing – Eric Gordon All Stars Beachem is another talented wing guard on the Eric Gordon All-Stars. He has a similar build to Irvin (maybe a bit taller and a bit skinnier) and he also loves the perimeter jumpshot. He’s probably a better athlete and finisher around the hoop than Irvin, as he’s more athletic, but I would have liked to see him a lot more assertive offensively. The EG team has four guys all around 6-foot-5 to 6-foot-6 (Colin Hartman (IU), Devin Davis (IU), Irvin and Beachem) and sometimes it feels like none of them want to step up and be “the guy”.

Sherron Dorsey-Walker – 2012 REACH Legends Dorsey-Walker was instrumental in the REACH Legends’ upset over the Mac Irvin Fire. Sherron notched 34 points and was lights out from three point range. What I liked most about his performance on Saturday morning was that he didn’t begin the day just firing away. He attacked the basket a bit, made a few nice passes and then started heating up from three point range. Dorsey-Walker also hit a three to ice the game that brought back memories of Ali Faroukmanesh, catching the ball a long pass a couple steps inside the three point arc, taking two dribbles back and burying a three.

E.C. Matthews – 2013 Wing – Team Detroit It was a little under a year ago that Matthews put together a very strong performance at Michigan’s team camp. Matthews is a well-built wing prospect that lives to attack the basket. He’s probably around 6-foot-3 but has the athleticism to finish around the basket. His perimeter dribbling ability is solid but he needs to prove that he can knock down perimeter shots, something I didn’t see much of in the Family’s game versus the Michigan Warriors.

Drake Harris – 2014 Wing – Mean Streets Harris is an extremely talented 6-foot-4 guard from Grand Rapids. He has all of the tools – length, athleticism, dribbling ability, etc. – but he’s also productive, a great thing to see from a young prospect. He attacked the basket with ease and was able to finish around the hoop against an overmatched REACH Legends 15U squad. He also showed off a consistent jumpshot from the midrange.

Derrick Walton – 2013 Point Guard – Michigan Mustangs Quick with the ball and always looking to distribute, Walton is the straw that stirs the drink for the 2013 Mustangs. He can pretty much get wherever he wants on the court and has terrific court vision. We’ve focused on him quite a bit, and also posted video from King James, but it was more of the same from Derrick in Fort Wayne. There’s a lot to like about Walton, especially when he has the ball in his hands with a full head of steam pushing it in transition.

Jalen James – 2013 Point Guard – Illinois Wolves I saw James play in two games, one was an easy blowout win and the other was narrow upset over the Eric Gordon All-Stars. James barely played in the first game, simply because his squad didn’t need his services, and never seemed to get into a rhythm in the second. He certainly passes the look test, with a great 6-foot-3 frame, and does a good job getting his teammates involved. I’d like to see him be more aggressive in creating for himself but he does do a good job of distributing the basketball.

Mark Donnal – 2013 Center – Indiana Elite South Sophomore big men are extremely difficult to evaluate unless they are truly elite. Prospects like Donnal, who move well, have a great frame and skill, could end up blowing up or never read their potential. Donnal has a good motor and seems to have pretty good touch around the basket. He certainly needs to add strength, as he was often times pushed out of the lane despite having pretty good footwork. When he did hold position and his teammates got him the ball, he did a good job of finishing through contact. He’s not a great shotblocker, usually swiping down on the ball and being called for a foul, but is certainly an intriguing prospect to watch as he continues to develop.

Steven Haney Jr – 2013 Wing – Michigan Mustangs Haney is still recovering from an ankle injury that he suffered in Akron but he fought threw it and played at Spiece. He reportedly had 34 points on Friday night but didn’t get it going to that level when I saw him on Saturday. The strength of Haney’s game is obviously his shooting, but he’s not one dimensional either. Haney used his length to drive and get to the hoop (and the charity stripe) and is also a good passer as well.

Denzel Valentine – 2012 Guard – Michigan Mustangs – MSU Commit I had to include Valentine in this report just because of how much I enjoy watching him play. He’s not the best athlete, even on his own team, but he just has a tremendous feel for the game. He makes plays and makes his teammates better. There are questions as to where he’ll play at the next level – doesn’t score like a three and isn’t quick like a one – but as he continues to develop I see him playing on the ball in college.