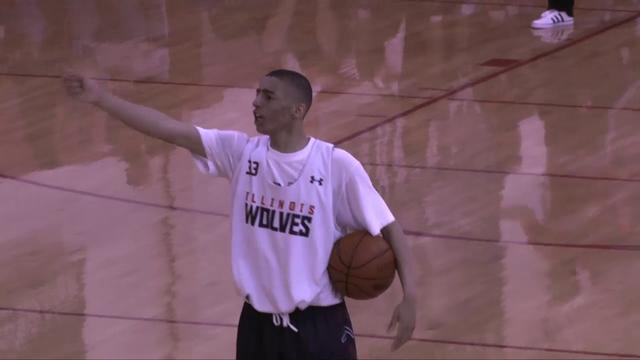 Jalen James is one of the fastest rising 2013 point guard prospects on the AAU circuit this spring. A 6-foot-3 guard, James has a prototypical frame for a point guard and plays the game unselfishly, consistently looking to setup his teammates.

Jalen played high school ball at Hope, a small charter school in Chicago that plays in the smallest division of Illinois high school basketball. Because of this, his AAU coach Mike Mullins noted, the publicity and recruiting buzz that James’s strong performance this spring has created has been a brand new experience.

James’s coach also pointed out that the transition between levels of basketball has been significant as well. With his high school team, James is often times the tallest player on the floor and the game is played a much different pace on the AAU circuit. Mullins emphasized how well James handled and accepted coaching, noting that the Wolves program is “very hard on it’s point guards and he knows that”.

In an interview posted by the Hoosier Scoop, James passed along several updates on his recruitment.

James plans to visit Michigan on Sunday with his brother, noting that “Michigan doesn’t offer sophomores early and definitely needs him to visit”, and will also try to make it up to Ann Arbor for camp during June. John Beilein was in personally to watch him workout during the live workout period in April and Michigan has been showing interest since November.

He rattled off a list of Illinois, Wisconsin, Michigan, Baylor, Cleveland State, Dayton, DePaul, Xavier and Missouri as some of the schools currently interested and noted offers from Baylor and Cleveland State.

Click here for all of our coverage from the Spiece Run ‘n Slam Classic.