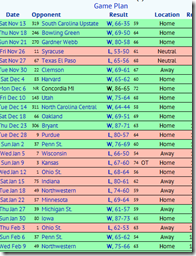 Demetrius Jackson was one of the most impressive guards at Spiece, and buzz around him is growing. College coaches aren’t allowed on the road to evaluate prospects but there’s no question that they have their ears to the ground, listening to scouts across the country.

One midwestern scout raved about the 2013 guard’s game, claiming that he had the potential to be a star at the next level and was the high major guard in Indiana that nobody is talking about. Michigan and Xavier prioritized Jackson early, and will almost assuredly extend a scholarship on June 15th, but now others are taking serious notice. Illinois and Notre Dame remain involved while Michigan State, Purdue and Indiana are also entering the picture.

The IndyStar profiled Jackson’s recruitment and his AAU coach explains that Michigan has prioritized the explosive guard:

“Michigan has said he’s their No. 1 recruit in that class,” Creech said. “He really tore it up at the Run ‘n’ Slam (in Fort Wayne last weekend) and a lot of coaches found out.”

If you missed it, we posted video of Jackson at the Spiece Run ‘n Slam on Monday.

There are plenty of angles to analyze in regards to the latest Darius Morris contingency plan to surface. The first question is obviously what sort of player is Luke Hancock.

I e-mailed Ryan, of GMU Hoops, to get some information on Hancock’s and this was the report he sent back:

Mason fans would hate to see this guy go, he’s a fan favorite.  Commentators often refer to him as having “sneaky athleticism” or being “deceptively athletic”. [Ed: You’ll never guess why]. Here’s a good example of it.  He matured into more of a guard role during his sophomore season and was labeled a “point-forward” because he brought the ball up the floor on most possessions. Definitely an unorthodox type of player with his long loopy dribbles and slow pump fakes but he gets the job the done and finds different ways to score. He has good range but is a better asset when he’s driving to the basket. He led George Mason in assists last season and as you could see in that Villanova NCAA tournament win that he was one of the most valuable guys on the floor.

Patrick Stevens wrote a nice profile on Hancock back in March and echoes Ryan’s sentiments about Hancock “getting the job done”, noting that he was one of two players in the CAA to average at least 10 points, four rebounds and four assists per game.

Hancock feels like a good fit. He’d have a year to learn the Michigan system and then step into the fray after Michigan graduates two experienced guards (Novak and Douglass). He’d provide a bit of insurance for Michigan’s young backcourt that season and would be 22 years old when he begins his first year of eligibility after the transfer.

He would also be the seventh player on the Michigan roster that would be scheduled to graduate in 2014. That is awful class balance, but on the other hand the last couple season have taught us that it’s a fruitless business to project the future. I’m not sure anyone would have projected Laval Lucas-Perry and Darius Morris to be off the roster for before the 2011-12 season began. Considering 5th-years, transfers and early draft departures, it’s almost impossible not to expect some form of attrition every couple years.

There’s also the (major) issue of whether Hancok wants to transfer and whether he’d rather play closer to home at Virginia. The official athletic department line is that Hancock was “granted permission to explore his options” but has not decided on transferring. New head coach Paul Hewitt discusses the situation in this interview.

We know that Michigan will play on the road and most expect a tough match-up. North Carolina has been rumored but that’s merely speculation. We’ll find out in a week.

We did however make several other updates to the future schedule page, adding Bradley, Oakland and Towson to the “confirmed” listing.

Michigan wants to add a high profile home-and-home series but initial plans to play Texas have reportedly fell through, mostly because of the surprising road game that Michigan will play in the Big Ten-ACC Challenge. With seven non-conference games pieced together, there is still room for a high profile game but any details remain under wraps.

It was also reported that Michigan will host Bradley in December in the first leg of a home-and-home series. Bradley has been a relatively strong Missouri Valley team over the past decade but has fallen on a bit harder times of late.

There are a surprising number of connections between the Michigan and Bradley programs. Bradley recently hired Beilein’s son, Patrick, to a coaching position and Michigan also signed Max Bielfeldt, who grew up minutes from Bradley’s campus in Peoria. Finally, John Beilein shared a first-second round NCAA Tournament site with Bradley in 2006, when both teams advanced to the Sweet 16.

The Washington Times also quoted Towson’s athletic director on a trip to Ann Arbor, that game should serve as Michigan’s “mainland game” for the Maui Invitational.

Finally, Mike Rothstein confirmed the Oakland game at the Palace with John Beilein himself. The date has not been announced but Mark Snyder tweets that game is expected to be played on Dec. 12th.

Pre-season polls are generally worthless, but it’s worth noting where Michigan stands in the latest batch of polls that national columnists and bloggers have released after the NBA early-entry deadline. Andy Katz has Michigan at No. 23, noting that the Wolverines will “Wisconsin behind Ohio State in the Big Ten”.  Gary Parrish bumped Michigan down to No. 20 on CBS Sports’ poll while our friend Mike Miller has Michigan at No. 17 on NBC Sports.

As for Darius Morris’s draft stock, it continues to move upward. Chad Ford has Morris at No. 26 on his big board but going 21st in his latest mock draft. NBADraft.net wrote a long profile/scouting piece on Morris and has him at No. 23 in their latest mock. NBA Draft Insider has Morris all the way up at No. 17 while DraftExpress is a bit more cautious with Morris going in the first pick of the second round.

Team workouts will obviously be extremely important for Morris, who selected Dan Fegan as his agent, over the next several weeks