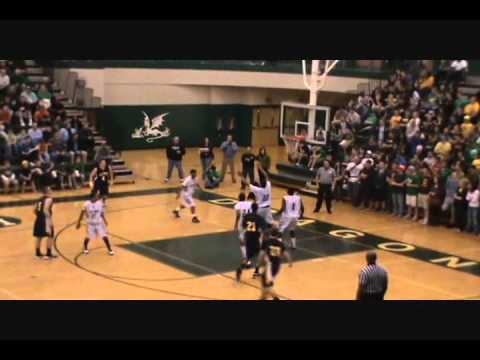 Carlton Brundidge is quite possibly the highest rated recruit that John Beilein has landed in his 30+ year coaching career. Despite his high ranking, Brundidge seems to have been lost in the shuffle among Michigan commits. Maybe it’s because he committed early, because there are some questions of how his game and athleticism will translate to the next or because his game isn’t all that flashy. The bottom line: Carlton Brundidge can score the basketball.

Brundidge averaged over 20 points per game, over four years of varsity high school basketball while leading his team to the state semifinals in his final two season and was one of the most proficient scorers in the prestigious Nike Elite Youth Basketball League.

He’s played in the Nike All-American and NBPA Top 100 Camps along with the most prestigious national AAU tournaments. Brundidge has consistently produced against the best prep basketball players in the country.

Brundidge was a known commodity early on in his high school career, with a handful of scoring outbursts during his freshman year, followed by a strong summer season before his sophomore year. Other schools were involved in Carlton’s recruitment, but it was always considered a Michigan vs. Michigan State battle. Brundidge was the second, and most prestigious, in-state recruit that John Beilein had landed.

After his commitment shortly before his  junior year of high school, the rest of Brundidge’s prep career is easily documented by recapping one scoring outburst after another.

He scored 44-points at the King James Classic in Akron in front of our cameras:

Later in that tournament he went head to head with future teammate Trey Burke:

Brundidge, a 6-foot-1 junior out of Southfield (MI), was balling all weekend. If we were to name an MVP, without hesitation, the University of Michigan commit would have enjoyed the hardware.

The two guards sent the crowd inside Barberton High School into a frenzy. They were so hot the fire alarm sounded with 18 seconds remaining in the game causing the masses to file outside before entering the gym once again for the final seconds. Brundidge scored 13 points in the first five minutes of the game, but didn’t score again until the 2nd half. Burke tried his best to keep Red in the game with 14 1st half points.

In the 2nd half, Burke and Brundidge went back-and-forth putting on a scoring clinic. The Michigan commit scored 24 points in the final 16 minutes finishing with a team-high 37 points. He was able to connect on four three-point goals in the half and five for the game.
Burke scored on pull-up threes, euro-steps, and running tear-drop floaters.

We have seen thousands of players and nobody at the high school level shoots the runner better than Burke. The Penn State commit tallied 25 2nd half points including six bonus ball and seven in all. He recorded a game-high 39 points to go along with four rebounds.

Against Rotary, Brundidge went for (yes, you’re reading this correctly!) 53 points. Forget the digits for a second and consider the setting. The Arizona Stars in the game before took the Family to the woodshed and Brundidge wasn’t a factor. Instead of hanging his head, he put his head down, pointed himself at the bucket and went to work. We didn’t see most of the game but by all accounts, including the scorebook, he had it rolling. How you respond to adversity says a lot about the player you are and he had the answer.

Brundidge was equally as proficient on the high school circuit. Southfield got off to a slow start during his junior year but Brundidge carried his squad on a surprising run to the state semifinals. He opened his senior year with a 41 point outburst, but also deferred to his teammates at times, seeing a slight decrease in his scoring numbers with increased assist numbers. He had 29 points and eight assists in Southfield’s biggest regular season game of the season before leading the Blue Jays to the state semifinals for the second consecutive year.

It’s tough to apply a standard basketball label to Carlton Brundidge. He’s not a player that is most comfortable playing on the ball, but he’s not a shooting guard either. The first word that comes to mind is combo or scoring guard, but the best term is probably “power guard”.

Brundidge’s game all starts with attacking the basket. He uses his strength to power through smaller and weaker guards and does a great job finishing through contact. He’s not an overwhelming athlete but is a very good rebounder for a guard. He has the handle of a slasher rather than a point guard and his shooting continues to develop. He has a solid mid-range game but his perimeter shooting is streaky. I’ve seen Brundidge hit multiple threes in a game, but also seen him struggle from three point range. Even more than his shooting, Carlton’s passing has improved significantly over the past several years, especially off of the drive and kick.

I would be remiss not to point out Brundidge’s toughness. He attacks the basket, takes hard fouls and plays through injuries. The Family has a reputation for churning out tough kids and Brundidge continues that trend.

Here’s how some of the national types describe Brundidge’s game:

Brundidge is a strong and physical scorer. He can get to the rim in transition as well as in the half court. He simply power drives through defenders where he can finish at a high rate or draw the foul. Brundidge also can make mid range shots off the catch or dribble with range to about 17 feet and can score big numbers in a short period of time when he is in the flow. Brundidge is an excellent ball handler and an under rated passer mainly because he is such an excellent scorer. He can drive draw and kick from anywhere on the floor.

Brundidge must work to extend his shooting range to behind the arc and continue to hone his point guard skills. He is a good athlete that plays over 200 pounds so he must pay attention to his weight and work to be in great shape year round.

Brundidge is an excellent scorer who has confidence and is fearless. He competes on both ends of the floor. He really is a scoring guard in a point guard’s body although he can get others a shot when he attacks and the defensive collapse. He is strong and physical and is capable of scoring big numbers.

Being able to score is a pretty important attribute. Any prospect who can put up 53 points, even with the benefit of a couple overtime periods, can definitely score. A burly guard, Brundidge loves to bully defenders with his strength and create space for his jumper. He knows how to draw fouls and is also a threat from behind the 3-point line.

Brundidge’s skill set is unique to next year’s team. Because Carlton’s game is completely different than Michigan’s other backcourt options, there are a lot of different ways that he could be used. He’s the only player whose game revolves around attacking the basket, something that has been a weakness for the Michigan program under John Beilein.

Whenever Beilein is asked how he plans to use Brundidge the answer has been concise: ball screens. Brundidge’s high school offense rarely, if ever, utilized ball screens, but the Michigan coach has made it clear that he feels Brundidge can thrive in those situations.

Brundidge is a natural fit for the off guard position but, in certain situations, I wouldn’t be surprised to see him run the three position offensively. That would require playing alongside a bigger two guard – probably Zack Novak or Matt Vogrich – for defensive purposes, but the three position in the Michigan offense would provide Brundidge a perfect situation to utilize his strength, coming off a screen on the wing with a chance to make a play.

There are a lot of fun scenarios when thinking about guard combinations. Douglass’s shooting skill would compliment Brundidge’s attacking ability. A backcourt of Burke and Brundidge might be the most attacking combo of guards that we’ve seen under Beilein. With Brundidge at the three offensively, you could see Novak and Burke or Douglass when Tim Hardaway Jr. needs a breather.

In reality, Brundidge’s role on next year’s team will probably be to provide a scoring spark off the bench. He probably won’t play as many minutes as Trey Burke, because of the immediate need at the point guard, but he will play a significant role. Although they are completely different players at different positions, I see his role similar to Deshaun Thomas. Providing quick spurts off of the bench with a high shot percentage, with some question marks defensively but the ability to score a handful of points quickly.