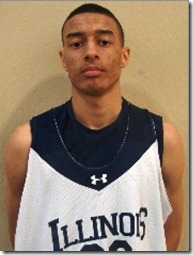 2013 Chicago point guard Jalen James made the trip from Chicago up to Ann Arbor on Sunday afternoon for an unofficial visit. James is a prototypical pass first point guard with good size and one of the fastest risers on the AAU circuit this spring, after playing at a smaller underexposed Chicago charter school.

We posted video of James at the Spiece Run ‘n Slam Classic which you can see here, but here are some quotes from Jalen after his unofficial visit this afternoon:

On the Michigan visit: The whole coaching staff was there and when we came in we sat down to watch a power point about the school. Me and Coach B went over to the practice facility and then the players study hall (Ross Academic Center) to talk about school and stuff. My brother and I went out to lunch and then came back and met up with the coaches. They took us to the stadium, football practice facility and stuff like that. Then we watched some film and he (Beilein) broke down the point guard position for me.

On what stood out about the Michigan visit: Really how he (Beilein) cares about the school situation. He really, when I first got there we talked about basketball for a minute, but he really struck home books. That’s a plus for me. He makes sure that all of his players graduate and have a good education. And to play for him you have to have a good education.

On a Michigan offer: They said they don’t offer young players so fast but he said after I finish my sophomore year, then we can probably get something working.

On other visits: I’ve only been to Michigan for now. I’m planning to go to Illinois and Xavier at beginning of June and I’ll be visiting Indiana mid-June. That’s all I have scheduled right now.

On elite camps: I’m planning to go to elite camps at Illinois and Michigan, and Northwestern and Missouri have both invited me. June is my free month, so I’ll be a lot of places in June.

On the main schools involved in his recruitment: Baylor and Cleveland State have offered. Michigan, Illinois, Wisconsin, Tennessee, DePaul, Dayton, Providence, Florida State and Indiana are the main schools recruiting me.

On whether any schools stand out: Nah, I’m just beginning the process. I don’t have a favorite right now and am just taking it all in.

On the main criteria going into his college decision: Distance really doesn’t matter. I want a close relationship with the coach and my teammates. I want to play up and down tempo without a lot of sets, but pick-and-rolls are alright.