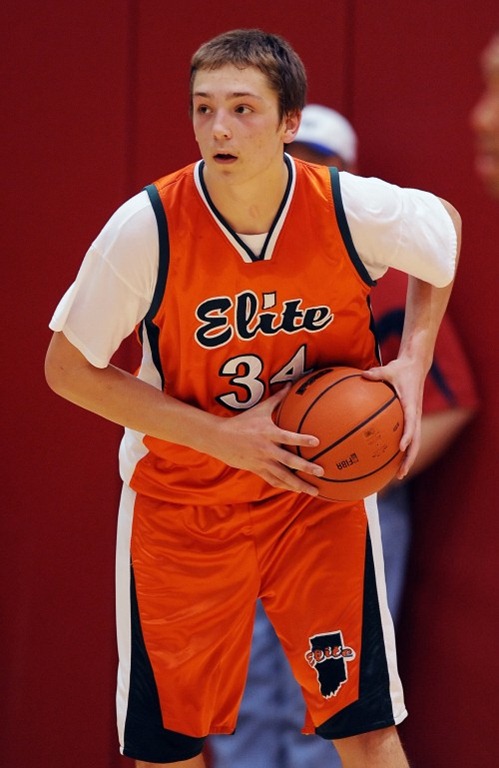 Those that saw Glenn Robinson III during his junior season at Lake Central told us that he had the chance to put together a very impressive AAU season with the SYF Players. Throughout the spring AAU circuit, Robinson has made those prognosticators look good.

Almost every national scouting report emphasizes just how much Robinson has improved over the last 12-months. He continues to grow into his body and become more assertive on the offensive end. Playing along Mitch McGary, one of the fastest rising 2012 recruits, has also given him ample opportunity in the lime light in front of national scouts. His strong spring has already earned him a spot, at No. 90, in the most recent Scout.com top 100.

It was more of the same this weekend at the Adidas May Classic in Bloomington as Robinson helped SYF to a 2-0 super-pool record and a trip to the gold bracket quarterfinals. Scout.com was impressed ($) as were a number of tweeters at the event.

We’ll have video of Robinson from the Adidas May Classic posted later this afternoon.

The Eric Gordon All-Stars 16U team has taken some criticism for underachieving on the AAU circuit this spring. The squad features an abundance of high-major prospects including Indiana bound Colin Hartman and Devin Davis, Purdue commit Basil Smotherman and Michigan targets Zak Irvin and V.J. Beachem. Despite all of the talent, the squad lost in the first round of bracket play at the Pittsburgh Jam Fest and at the Spiece Run ‘n Slam Classic. (Photo Credit: Herald Times Online)

EG10 got back to its winning ways this weekend, winning the championship at the Adidas May Classic thanks to strong play all around. Zak Irvin and V.J. Beachem were both impressive. Irvin earned praise for his defensive abilities against Malcolm Hill and the SW Illinois Jets, he also added 19 points in the quarterfinals. Irvin also earned a shout out from Scout.com ($) for his strong play on Sunday. Jody Demling called VJ Beachem a “big time prospect” and he had several strong performances.

A pair of prospects that Michigan has been recruiting longer than most have emerged onto the national radar over the past couple weeks: Demetrius Jackson and Mark Donnal.

Jackson’s performance at Spiece last weekend (video) opened some eyes and has caused his recruitment to balloon, his most recent suitors include Michigan State and Indiana along with his original list of Xavier, Michigan, Notre Dame, Purdue and Illinois. (Photo Credit: Herald Times Online)

We’ll have video of Jackson from the event in the coming hours and days but Hugh Kellenberger wrote up this scouting report over the weekend:

You could excuse Jackson of trying to do too much, but after his team fell behind by double-digits he was put in the position of trying to steer a one-man comeback. It didn’t work, but Jackson has great explosion, is active on defense and has no problem getting to the lane.

Big man Mark Donnal has quietly put together a strong spring performance in his own right. He was overseas early in the spring, missing a handful of events, but has returned and played well at Spiece and now the Adidas May Classic. Donnal is a prototypical pick-and-pop big man that needs to continue to develop strength but has an intriguing skill set with a good motor.

Hugh Kellenburger also had the opportunity to watch Donnal at the event and caught up with his AAU coach, Dan Dakich:

Donnal is the kind of forward who always seems to find success at a program like Butler, Wisconsin or Michigan. He’s an inside-outside threat, draining 3-pointers early before putting himself on the block late. He finished with 23 points, four blocks and five boards.

“I thought at the end, when he went down on the block, he just did what he can do,” Dakich said. “He has a great touch, he finally started getting post position. … When he goes on the block, he’s a strong, skilled, good kid.”
Indiana is recruiting him, as is Butler, Michigan and Michigan State, among other

We discussed Drake Harris after the Spiece Run ‘n Slam Classic last week, and also posted video. Harris impressed yet again in Bloomington and stopped for this video interview with Jody Demling: