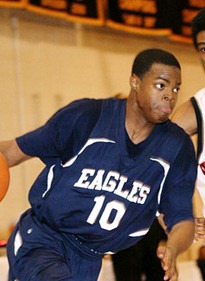 Michigan has made sophomore  point guard Derrick Walton an early priority in the class of 2013. John Beilein has been in to watch to watch him workout and the Michigan coaching staff paid close attention during Walton’s sophomore season at Chandler Park, where he averaged 24 points and six assists per game. After missing a tournament early this spring with a knee injury, Walton has played extremely well with the Michigan Mustangs on the AAU circuit.

Last Friday, Walton made the trip up to Ann Arbor for an unofficial visit with the Michigan coaching staff.

On the visit: Basically we toured the campus and talked about the facilities being rebuilt and how it would be if I decided Michigan.

On what stood out:  All of it stood out. I wouldn’t say anything was better than the others. I just liked it all.

On comparing it to other visits: I would, by far, say this was the best one yet.

On other recent visits: I haven’t taken many unofficial lately, I’ve just been going to games and stuff during the season.

On fitting into the Michigan offense: Great. From what I see, they space the floor really well and work off of pick and rolls, I think I’d fit in great.

On being able to do some of the things Darius Morris did: Pretty much, but I’m pretty sure I can’t post up as good.

On other camps and visits planned: Not off the top of my head, but I should be attending the Elite Camp at Michigan.

On whether he discussed a potential scholarship offer: Yeah, but not blatantly, they said “we’ll see around the June 15th area”.

On specific areas he’s working to improve his game: Just consistently shooting the ball well and finishing at the basket.

On whether any schools are recruiting him harder than others: I wouldn’t say harder than the others, they’ve all been intense but mostly Michigan, Michigan State, Xavier, Western and Central.

On whether any schools stand out: I’m still open, not really playing any favorites right now.

On the main criteria going into his decision: The relationship with the coaching staff, how I’d fit in the offense and grow as a person.

On a time frame for making a decision: If I really feel that a school is best for me I’d decide early, but right now I’m alright with sticking it out.