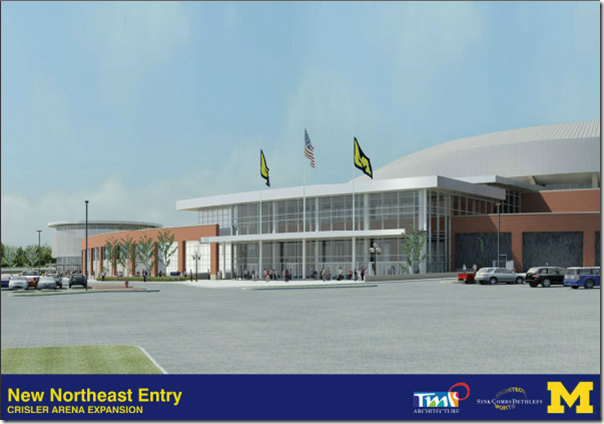 The University of Michigan Regents approved the schematic designs of the $52 million makover to Crisler Arena. The overhaul will include new fan entrances, additional retail and ticketing spaces as well as a private club space.

The Basketball Player Development Center is currently under construction and is expected to be completed later this year. The first phase of Crisler Arena renovations was previously approved for $20 million and will focus on infrastructure improvements. New scoreboards are also being installed in Crisler Arena this summer. The entire project is expected to be completed by the winter of 2014.

Full release and more photos after the jump

ANN ARBOR, Mich. — The University of Michigan Board of Regents today (Thursday, May 19) approved the schematic design for the second phase of renovations and expansion to Crisler Arena.

The renovation will improve seating for people with disabilities and provide expanded and renovated concourses to allow for an increase in restrooms, concessions and other fan amenities. All seats throughout the arena will be replaced.

Athletic resources and gifts will fund the $52 million project. The construction schedule for the second phase will be presented to the regents when approval is sought for the schematic design.

TMP Architecture, assisted by Sink Combs Dethlefs, will begin the design work immediately. Those firms designed the new $23.2 million Basketball Player Development Center, which is scheduled to be completed later this year.

In October 2010, the Board of Regents approved the first phase of the Crisler renovation at a cost of $20 million. This initial phase addresses the highest priority infrastructure needs such as repair of the roof, electrical, plumbing and air handling systems.

During the last decade, improvements to Crisler Arena have included renovations to the men’s and women’s locker rooms, new lighting and sound systems, installation of courtside seating and updates to the strength and conditioning areas.

Construction of Crisler Arena initially was completed in 1968.

If you are wondering what Crisler Arena looks like this moment: