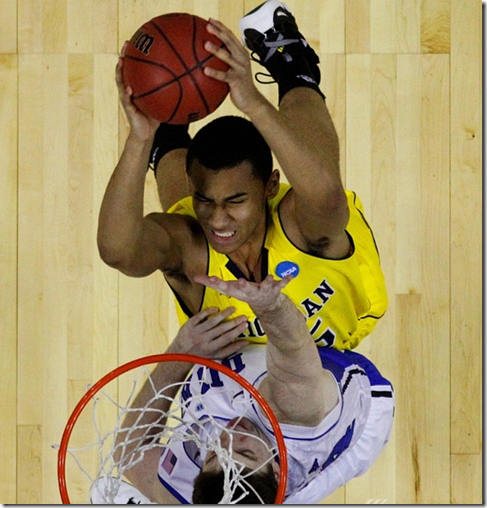 Much was made of Darius Morris’s dramatic improvement that saw him go from disappointing freshman to potential first round draft pick. While it’s unlikely that any player on next year’s roster will improve as much as Morris, the opportunity is there. Morris was responsible for roughly half of Michigan’s offense last season and there are plenty of shots and possessions up for grabs next season.

What defines a “breakout player”? It’s more than just routine improvement. A player like Morris improved but he also was presented the opportunity to flourish.  Morris always had the tools, but was clearly not comfortable in the college game as a freshman. His physical ability – size, strength and passing ability – combined with his incredible work ethic yielded dramatic improvement which wasn’t unleashed until Michigan’s two primary shot-takers (Harris and Sims) moved on. In this post we’ll take a closer look at the breakout candidates on the current roster and the reasons they are likely or unlikely to breakout next season.

Obviously the chances of a Morris-esque leap are far fetched, but there are some candidates who have the chance to go from role player to key contributor.

Why? Smotrycz displayed tantalizing flashes of his potential as a freshman and when he played well, Michigan usually played well. The Wolverines were 7-2 in the nine games that he scored in double figures with wins over Clemson and Michigan State and narrow losses to Duke and Ohio State. After a mid-season lull he finished the year on a strong note, hopeful to carry that momentum into the next season. His game isn’t perfect but he’s a legitimate three point shooting threat at 6-foot-9.

The opportunity is there, as Zack Novak is far from an ideal fit at the four position, in terms of both minutes and shots. Early returns, like this snippet from his gym in Boston, point toward Smotrycz putting in the necessary work this summer to continue to improve:

Phase 1 is over for Evan Smotrycz… 13lbs weight gain, 1.5″ increase on his standing vertical jump, 2.5″ on his max touch vertical jump…I am not sure people actually understand how hard it is to increase your weight by that much while at the same, getting that much more explosive.

Why Not? While there’s a lot to like about Evan’s potential, there are plenty of question marks and red flags as well. He’s not a great athlete, has subpar length and is a below average rebounder for a 6-foot-9 player. A lot of his strong play late in the season came at the five position, which probably isn’t where the coaching staff would like to see him end up long term. Does he have the quickness to guard fours or the strength to guard fives?

To truly take the next step, Smotrycz needs to develop an in between game. He has an effective pump fake, but can he take two dribbles after the shot fake and knock down the 18-footer? That’s the move that would transform him from shooter to scorer.

In a perfect world, Smotrycz is the primary four-man on next year’s roster. However, Zack Novak is going to play somewhere and Smotrycz will have to be good enough to prevent him from playing major minutes at the four.

Why? In terms of sheer potential – based on athleticism, length and size – Horford might top the Michigan roster. Bacari Alexander mentioned on the radio in May that Horford was “flirting with 6-foot-10 and 243 pounds” which might be exaggeration but is still encouraging.

The sample size is small but Horford grabbed 25% of opponents’ missed shots while he was on the floor, a number far better than any other Michigan player last season. He’s a natural rebounder and as his offensive game develops he could be a real player. Big men tend to develop slow, and his older brother was no exception, so there are plenty of reasons to be excited.

Assuming Smotrycz settles at the four spot, Horford will split time at the five position with Morgan. Morgan has previously demonstrated the propensity to pick up cheap fouls and there should be minutes available for Horford to make an impact.

Why Not? Despite his potential, Horford looked like the game was moving too fast for him last season. He was late on defensive rotations and just seemed a step behind the game at times. That “aha moment” tends to come at different times for different players and there’s no guaranteeing that the game will slow down for Jon as a sophomore. While his potential oozes, Jon is still far from physically imposing. He’s been working hard to develop strength but he needs to combine that with more aggression on both ends.

Why? Morgan improved significantly during his redshirt season, exceeding almost everyone’s expectations in his first season of play in a maize and blue uniform. He ran the less glorious end of the pick-and-roll, as a screener, effectively, always seeming to make the right cut. Morgan averaged a very solid nine points and seven rebounds per game despite a limited offensive skill set.

Why Not? If Morgan can demonstrate a solid back to the basket game, or a nice 10-15 foot jump shot, his offensive game will improve by leaps and bounds. Until he proves that he has those offensive tools, and without Darius Morris running the pick-and-roll, it’s tough to project Morgan as a surefire pick to make a dramatic improvement for the second consecutive season.

Stu Douglass and Zack Novak are probably about what they are at this point. Both have steadily improved, and provide a lot to the team, but are unlikely to make the jump from 8-10 point per game scorer to 15 point scorer.

Blake McLimans was the designated shooter that couldn’t shoot last season. Improvement should be expected, and I don’t think it’s unreasonable to expect him to shoot the ball much better next season, but his game isn’t diverse enough to develop into more than a role player next season.

Matt Vogrich improved as a shooter, and provided Michigan with a huge boost off of the bench in key moments, but has the downside of playing behind most of Michigan’s most established quantities. Tim Hardaway Jr. will be the primary shot take on next year’s team and demand a majority of the minutes at the three, while the two position might be the deepest (numbers wise) on Michigan’s roster. Even if Vogirch improves, it’s unclear where he will find enough minutes and shots to qualify as a breakout performer.

Speaking of Hardaway, he’s not a candidate for this list because he’s expected to carry the team. He was the second best freshman in last year’s Big Ten season and averaged 17 points per game over Michigan’s final 16 contests. His season will be about living up to expectations, not transforming into a new player.