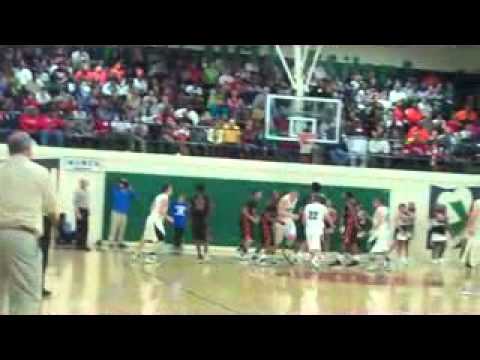 Max Bielfeldt was the third commitment in Michigan’s class of 2011 and the one that casual observers probably know the least about. Fans and reporters alike first learned that Michigan was pursuing Bielfeldt on February 7th, a month and a half later Bielfeldt had committed to the Wolverines. Compared to Carlton Brundidge, who committed to Michigan after his sophomore season, or Trey Burke, who has seemingly endless amounts of video footage on the internet, Bielfeldt is a relative unknown.

Max Bielfeldt was one of the more promising big men in the state of Illinois early in his career. He was big and strong and produced at a high level, overpowering smaller players of his age. High majors showed interest but his lack of growth would prevent any major offers for much of his prep career.

Bruce Weber was the first to offer Bielfeldt, whose family has donated extensive funds to the University, but John Beilein had managed to make an early, lasting impression. After Illinois offered, Bielfeldt insisted on making one more trip to Ann Arbor before eventually breaking away from his family ties to Illinois and committing to Michigan.

Bielfeldt is listed at 6-foot-8 on official rosters but those that we trust, and have seen him play, tell us that 6-foot-7 is probably his true height. He’s undersized height wise but is able to use his strength to still be productive. The question is how that translates to the next level. Described as a “Princeton post player”, Biefeldt isn’t an Evan Smotrycz type perimeter big but he’s an adequate passer with a solid 16-17 foot jump shot.

A UMHoops reader, Nathan I, contributed this report from a game that both Bruce Weber and John Beilein watched:

Several times in the game Bielfeldt would receive the ball around the high post and then face up on his man to take him off the dribble. He showed a shot fake that worked several times which allowed him to get by his man and drive towards the basket. It appears that he can handle the ball relatively well for a guy his size that plays in the post. Bielfeldt showed good touch around the basket and a consistent motion on his free throws. His misses from the line were shots that were halfway down. He only took one jump shot from outside five feet and made it. He clearly realized he strength is in the post and didn’t try to float outside.

Bielfeldt lacks elite athleticism and quickness. He threw down a one-handed slam from completely standing still but his lack of quickness hurt him in other areas. There were multiple times where he beat his guy with the shot fake and should have exploded to the basket for a dunk butanother player was able to rotate and usually ended up fouling him on his shot attempt.

Max personifies the definition of a blue-collar player.  He brings his lunch bucket to work game-in and game-out and you know what you are getting from him every time he steps on the court.  He is an enforcer underneath because he gets after it on the glass and is also a consistent scorer in the paint area.  In addition, he also has the ability to face up and knock down shots from beyond the 3-point arc.  While Max may not wow anybody with his athleticism, but when one considers his tremendous work ethic and the skills that the brings to the table, we believe that he would fit into John Beilein’s offensive system quite well–a system that has been highly successful in utilizing face-up 4 men.

This strong high energy power forward never takes a possession off. Bielfeldt runs the floor on a consistent basis and simply out works opposing post for easy baskets. In the low post he scores with good touch and crafty moves. Bielfeldt is a below the rim finisher that can also face and knock down mid range and open three with needed time and space. He can drive from the high post as well. Bielfeldt is a good passer and active rebounder on both ends. He could be affective in both pick and pop or role situations. Bielfeldt won’t wow you with athletic ability but will with his consistent production.

Bielfeldt must work on attempting to improve his explosiveness he is an average athlete at best. And although his is strong he must continue to add strength in order to continue to hold his own in the low post.

“We love the talent, character, toughness and work habits that Max brings to our basketball program,” said Beilein. “His size and strength at approximately 6-8, 240 should help us a great deal around the basket. Max’s high basketball IQ, shooting ability and outstanding perimeter skill level allows him to have some versatility in his game. We plan on utilizing his talent in a variety of ways.”

It’s a safe bet that Bielfeldt will bring a healthy dose of physical play to the Michigan front line. It’s a little less clear where exactly he’ll play in the Wolverine front court, especially next season.

In an ideal world, a player of Bielfeldt’s size would play the four position. There he’d provide a stronger and more physical alternative to Evan Smotrycz with a respectable amount of skill away from the basket. The worry with Max at the four is that he won’t be equipped to defend Big Ten power forwards or isn’t quite skilled enough offensively to play a position that’s more of a wing than a post slot.

There’s also the possibility to play the center position. While obviously undersized for this spot, you would like to see a strong rebounder and a nice pick and roll/pop player at this position. Bielfeldt can do both of those things very well, but defending taller five men could be a problem.

With Smotrycz, Novak and possibly Christian playing minutes at the four, along with Morgan, Horford and McLimans at the five, it’s tough to etch out a solid chunk of minutes for Bielfeldt next season. More likely he’ll be a change of pace option next year. Providing Michigan with a more physical option, getting his feet wet and finding his way before next season when Michigan needs another solid option at the four spot after Novak’s graduation.